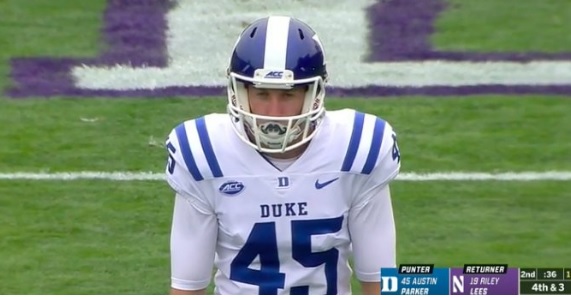 Duke’s punter Austin Parker wasn’t sure he was going to play football this season after he got kicked off the team last December when he was caught cheating on a test by a professor.

Thankfully Parker was able to make his way back onto the team after he proved himself worthy of a second chance.

In December, after charges of plagiarism led Duke to suspend Parker from school for the spring semester, it looked unlikely that Parker would play again for Duke.

For four months, it looked like a one-way road with no return. He worked to get his life back on track and with help from former teammates who never gave up on him

It started with a strong finish to the fall semester in the classroom, particularly in the class where he’d been caught plagiarizing earlier in the semester.

It continued after he’d moved back home to live with his parents in Concord. He worked in landscaping at Cabarrus Country Club, mowing and aerating the golf course. He helped coach the track team at his old high school.

It finalized last April 23 at the Durham Performing Arts Center, where the same Duke professor who had caught Parker’s plagiarism — whom Cutcliffe hadn’t previously met — described a side of Parker that changed the veteran coach’s mind.

Today, Parker became the darling of the Internet when he showed off this hilarious handlebar mustache mouthguard during his team’s game against Northwestern.

Can't think of a more Duke Punter move than having a whimsical mustache mouthguard pic.twitter.com/Z1FibMKEWd

Pretty sure Duke's punter has a mustache on his mouthguard 😂😂😂 pic.twitter.com/ppKx4PLKw1

Would just like to point out that the Duke punter's mouthguard has an old-timey handlebar mustache on it pic.twitter.com/ifolSiAwiH