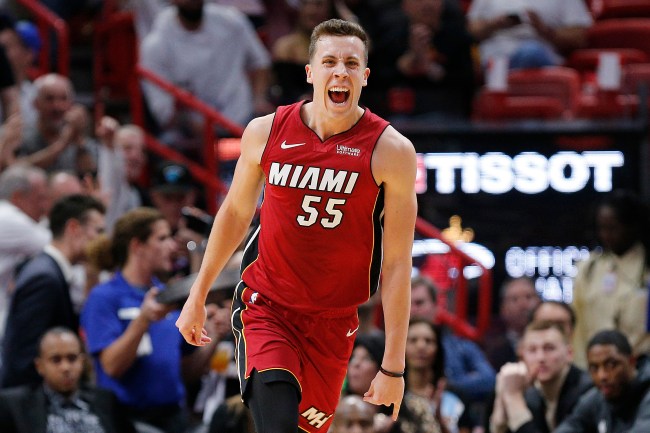 No big deal, but Duncan Robinson and I played on the same Middlesex Magic AAU team, albeit a few years apart.

The only real difference between he and I is that I got cut from my Division III team, gained 20 pounds around the stomach, picked up a worrying drinking habit, and live a life full of regret, whereas Duncan signed for millions and is one night away from playing LeBron James in an effort to etch his name permanently into basketball lore.

Other than that, SAMESIES!

Duncan’s career trajectory is an inspiration to unsung heroes everywhere.

Seven short years ago, he began his college career in Williamstown, Mass at Division III powerhouse Williams College. Go Ephs whatever that is!

Robinson became Williams’ first freshman to be named All-American, first D3Hoops.com National Rookie of the Year, first freshman NCAA All-Tournament Team selection and first freshman 500-point scorer. He then took his talents to Michigan where he finished his career with 237 made three-point shots (on 41.9% shooting), placing fourth on Michigan’s all-time list.

In 2017, a 23-year-old Robinson, apparently shocked by his success, began sending out feelers to big names in the sports media world in hopes to get an opportunity to become a keyboard warrior (Just like me! Samesies!)

Former Ringer writer-turned-Fox Sports personality Mark Titus was one of the guys Robinson hoped to get him in the door.

Got this text out of the blue 3 years ago. Hopped on the phone a couple days later and talked for an hour about getting into sports media because he thought his basketball career was winding down.

Three years later he's about to start in the NBA Finals. What a world. pic.twitter.com/egSweR0DWk

“Hi Mark, my names Duncan Robinson and I’m a senior on the men’s basketball team at Michigan. I’m reaching out to you because for one of my classes we were asked to connect with somebody in the industry that we are interest.

I’m a big fan of the ringer and specifically your work. Was wondering if you would have some time to connect so I could potentially learn more about your role as a staff writer and the ringer in general. Hope all is well with you!”

In the wise words of Will Smith from the 2006 drama Pursuit of Happyness:

2020: Robinson will Start in the NBA Finals! pic.twitter.com/lVJGmlgl7G

Got me thinking, I still have four years of college eligibility. Who’s looking to ball and has a functional inhaler they can lend me?