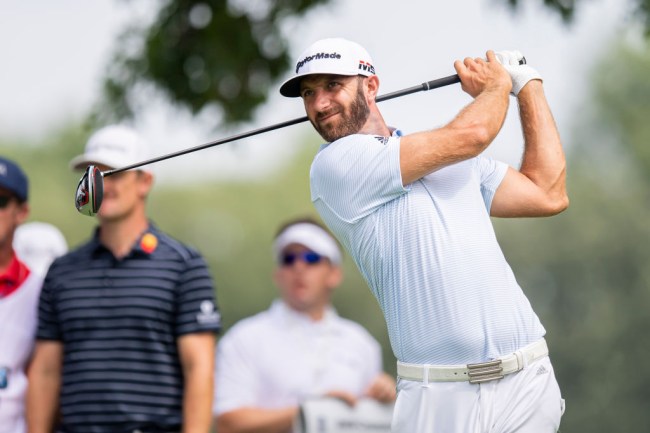 The new-look Bryson DeChambeau has been the No. 1 topic of discussion in the golf world since the PGA Tour’s restart and rightly so. Not only has he very quickly put on over 40 pounds, he’s obliterating the golf ball and his experiment has worked thus far as he has earned a win while not finishing worse than 8th in his last four starts.

With some people out there suggesting DeChambeau may be using steroids, and Brooks Koepka fueling that speculation along the way, the conversation surrounding DeChambeau isn’t going anywhere, especially if he keeps his current form going.

While he’s essentially changed the game, Dustin Johnson, also one of the longest hitters in the game, isn’t too worried about DeChambeau or the fact that he’s out driving everyone on Tour. He made it very clear that at his best, it doesn’t matter how long DeChambeau is hitting it off the tee, DJ doesn’t see DeChambeau beating him.

“I feel like my game and where it’s at and how far I hit it is far enough,” Johnson told Golfweek on Tuesday. “Right now, I feel like if I’m playing my game, he can hit it as far as he wants to, and I don’t think he’s going to beat me.”

Johnson also has a win under his belt since the Tour’s restart after hoisting the trophy at the Travelers Championship where he bested DeChambeau by four shots.

DeChambeau leads the Tour in average driving distance with an average of 323 yards off the tee. Johnson is tied for 24th on Tour in that same category averaging just over 306 yards with the big stick. Both players will tee it up at this week’s Memorial Tournament, where DeChambeau is the favorite.