Someone Just Paid $14,000 For A Dwayne ‘The Rock’ Johnson Miami Hurricanes Football Card 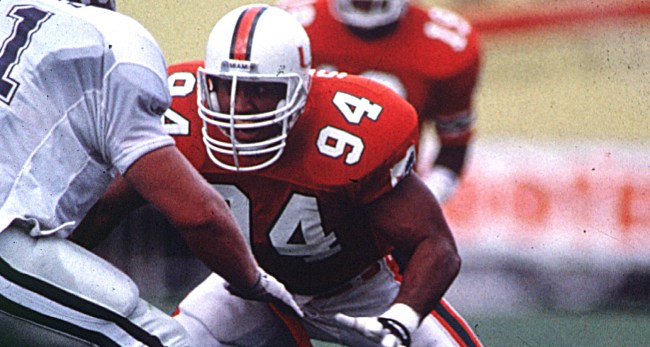 As we have seen over the past several months, the once-thought-dead market for sports trading cards is far from breathing its last breath.

Stories about fans and collectors buying and selling trading cards of players like Patrick Mahomes, Michael Jordan, Tom Brady, and Mike Trout are fetching tens, if not hundreds, of thousands of dollars at auction today.

Of course, we’re not talking about just any old baseball or football card when it comes to making a mint in that game. The cards have to be relatively rare and/or in perfect condition to warrant those high price tags.

Which brings us to today’s story about how some collector out there just paid almost $14,000 ($13,988 to be exact) at an eBay auction Wednesday night for a rare gem mint 10 1994 Bumble Bee perforated Dwayne “The Rock” Johnson University of Miami football card. (Plus $50 in shipping. Seriously. One might think that shelling out almost $14K for a trading card would get you free shipping, but no.)

The card, sold by PWCC Auctions, was part of a 24-card sheet produced by the Bumble Bee tuna company in 1994 that featured several University of Miami football players including The Rock, Warren Sapp, Ray Lewis, and Bob Marley’s son Rohan Marley.

TMZ Sports believes the cards were a giveaway item at the 1994 Orange Bowl and that there are less than 50 of them still in existence.

Previous auctions of the Dwayne Johnson Miami football card sold for anywhere from $2,293 in 2015 to $9,000 the past October, even though, as The Rock put it, “no one gave a sh*t about my card” when they first came out.

#TheRock is everywhere, including the hobby. This Dwayne Johnson Collegiate football card sold for $2,293 at auction: pic.twitter.com/OszssVFiKI

My eyes tell the story 👀😡🤣
Very cool to see my football card increase in value$ for whoever owns them. I was so damn proud when these first came out.
Even though no one gave a shit about my card – everyone wanted Ray Lewis & Warren Sapp’s. 😂🤷🏽‍♂️
What a journey. #TheU 🙌🏾 https://t.co/aF6s7m4qGm

I think news such as this is cause for a little trip down memory lane.