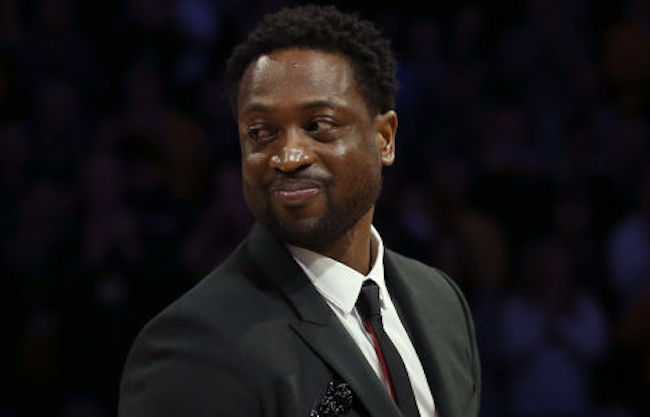 In recent years, players around the NBA have dove headfirst into the fashion world and used some of the millions of dollars at their disposal to compile a wardrobe filled with statement pieces that they showcase while making their way into the arena and addressing the media at press conferences after the game.

Sure, there are some people who could care less about what pieces of clothing the world’s most notable designers are slapping gigantic pricetags on but guys like Russell Westbrook and LeBron James consistently pull off fantastic ‘fits (even if the latter missed the mark a bit when he wore shorts with a suit).

He might not be in the league any longer but Dwyane Wade also has a penchant for channeling his inner Chotchkie’s employee and making sure his outfit always has some flare. However, it’s safe to say his fashion game has come a long way since he was drafted all the way back in 2003.

If we can backpedal for a minute, one of the catalysts for the NBA becoming a hotbed of style was the fairly controversial dress code David Stern introduced in 2005 to help clean up the league’s image during a time when hip-hop culture had an indelible impact on what players were rocking.

Stern came under fire from plenty of people—most notably Allen Iverson—by banning flashy chains, Timberlands, durags, and the baggy jeans and oversized tees that were in vogue at the time.

The aforementioned 2003 NBA Draft had arguably one of the best classes of all time, as Wade LeBron James, Carmelo Anthony, and Chris Bosh were all scooped up with four of the first five picks (the outlier was Darko Miličić, who the Piston selected second).

It also produced arguably one of the best pictures of all time: a photo of the hottest prospects in basketball rocking laughably huge suits while posing on stage, which perfectly summed up the preferred aesthetic of that era.

2003 nba draft…. Like the big suits… But never seen em on this kind ov suits after the draft day…. pic.twitter.com/WgyoTIfk

On Sunday, ESPN will give viewers a closer look at the life of the former Heat star in the form of the documentary D. Wade: Life Unexpected.

Business Insider spoke with Wade ahead of the premiere and brought up the picture in question and the alleged rigger of the dunk contest hilariously roasted himself and the other guys who got drafted that night, saying:

“We got enough fabric on these suits to clothe the entire country.

It’s funny when I look back at it and I thought I was, like, doing the right thing. I was like, ‘I’m not going to go loud.’ I went with a dark blue, navy blue suit. I’m like, ‘In 20 years they’re not going to, they can’t talk about me because I ain’t did nothing crazy.’ And they still found a way to talk about me because I did look like a deacon.”