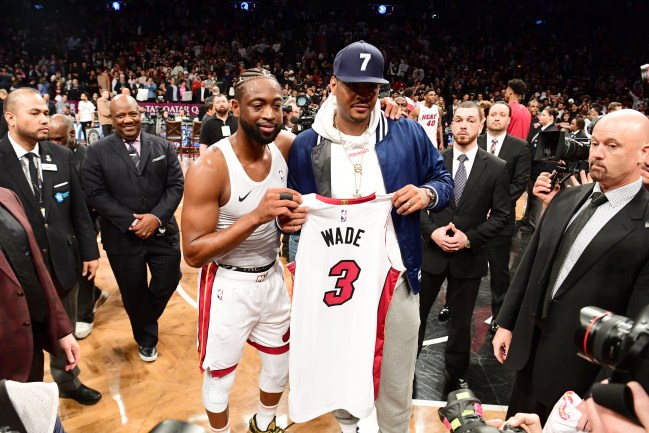 Dwyane Wade said goodbye for good to his NBA career the other night when he dropped a triple-double on the Brooklyn Nets, ending his soon-to-be Hall of Fame career in style. While the game was on the road and not in South Beach, that didn’t stop some of Wade’s best friends Chris Paul, LeBron James and Carmelo Anthony — otherwise known as the banana boat crew — from witnessing D-Wade’s final game courtside beneath one of the baskets.

Following the game, Dwyane Wade ran and gave some of that love back to Paul, James and Melo, but he also decided to do one last thing with the latter of the three — give his final jersey swap to Anthony, which was a routine Wade got into throughout his farewell tour all season long. So why was Carmelo Anthony the lucky recipient of that final game jersey? D-Wade explained the cool reason.

“I didn’t get an opportunity to play against Melo this year and exchange jerseys with him,” Wade said. “That was a missing piece out of this whole season, so everything worked out great for him being here, for me having an opportunity to give him my jersey.”

Carmelo Anthony did start this regular season with the Houston Rockets, but he didn’t last with the team long enough to play against Dwyane Wade, so the Miami Heat star made sure Melo got his before it was all said and done. According to NBA.com, Carmelo was one of the people who helped persuade Wade to return for one more season, so he was just giving back some love to his good buddy.

With a friendship more like brotherhood than just being buddies, Dwyane Wade and his fellow NBA superstars have nothing but love for one another, and it was clear the other night that they’ll do anything to show their support. When talking to Fox Sports Southeast, James explained why it was so important for the trio to be there for Dwyane Wade’s final game.

“CP played last night, we had our last regular-season game last night and Melo’s right here in New York so we kind of made the plan, made the decision to come up here,” James said. “Listen, we couldn’t miss D-Wade’s last game. This is the last time he’s going to be on an NBA floor wearing that Miami Heat uniform, that No. 3, so we’re happy to be here to support.”

Even though these four are some of the best basketball players of their generations and worth millions of dollars, it’s awesome seeing them acting like high school kids and cheering for one another. It’s a unique friendship that we often don’t see in many sports, and Dwyane Wade seemed to appreciate the gesture of Paul, James and Melo coming out to show him love that final game.