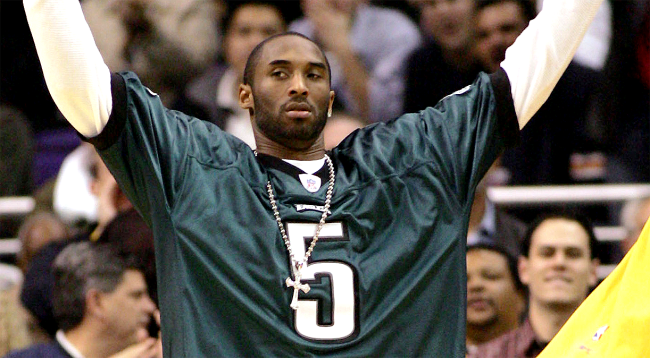 Kobe Bryant may sadly be gone, but as we have seen repeatedly since his passing he is still providing inspiration.

It’s a testament to how the man lived his life that despite only living for 41 years he was still able to affect so many people.

On a almost weekly basis, his legend and legacy continues to grow as more and more stories surface from those he motivated, even if he wasn’t aware he was doing it.

One such person who recently used The Black Mamba for some of that motivation is Philadelphia Eagles head coach Nick Sirianni.

Kobe, who was born in Philadelphia and played his high school ball in the Philadelphia suburb of Lower Merion, was a diehard, lifelong Eagles fan.

In 2017, Bryant spoke to the Eagles prior to their Week 14 game versus the Rams.

Will Eagles have that mentality Sunday vs Rams

We lost Kobe, his daughter Gigi and 7 others 1 year ago today

He would get superstitious watching his Eagles

They would go on to win the Super Bowl that season.

So, while Sirianni, unfortunately, couldn’t have Kobe speak to his Eagles team prior to their first NFC East game this year, he did still show his squad how the Mamba Mentality could be applied to the game versus Washington.

Knowing they would be playing against the team’s former franchise quarterback Carson Wentz, still a friend of many on the Eagles, Sirianni shared a clip from Netflix’s upcoming Redeem Team documentary about the 2008 United States Olympic men’s basketball team.

In the clip, Kobe Bryant talks about facing off against his good friend and Lakers teammate Pau Gasol who was playing for Spain, one of the biggest gold medal threats in that year’s Olympics. The best comments, however, may have come from LeBron, Carmelo, Wade, Bosh, and Gasol himself, when talking about what Kobe DID in that game.

In 2004, the US Olympic Men's Basketball team lost the gold and sought redemption in Beijing 2008. @KingJames, @DwyaneWade, and Kobe Bryant led The Redeem Team. This is that story. #TUDUM pic.twitter.com/95MCsOQ6h3

“It was a perfect video to add to the story I was telling there, and it did fit pretty well [with the opponent] of like, ‘Pau Gasol is my brother, Pau Gasol is my teammate, Pau Gasol, I love him, but I’m running through that guy’s chest,’” Sirianni said. “It was a cool video and it fit really well this weekend to say, we’re the ultimate competitors.”

Oh yeah… the Eagles ended up beating the Commanders 24 to 8.

“Someone made it clear to me that the score ended up 24-8, which I thought was pretty cool, even though we wanted to score a lot more points than that and we wanted them to score nothing,” Sirianni said. “But, we’ll take that.”