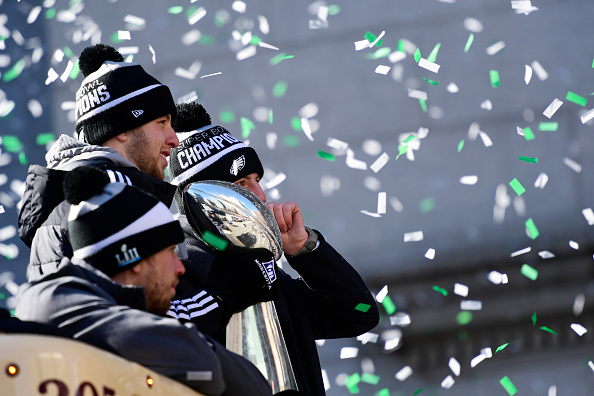 On February 4, 2018, the Philadelphia Eagles made history by winning their first Super Bowl. Apparently later that night Eagles fans were scoring in their own way because there is reportedly a baby boom going on in Philadelphia nine months later.

The birth rate is Philadelphia is spiking recently and the Eagles winning the Super Bowl might be the culprit. According to Philly’s ABC Action News, nurses in the baby unit at Lower Merion’s Lankenau Hospital were even told to “expect a surge of deliveries.” The Philly Special had a totally different meaning after the game was over.

“It’s really cool, it’s fun because it’s our hometown, our Super Bowl,” Lankenau Hospital nurse Allison Smith told CBS Philly. “We won and it’s something fun to do for our town and our hospital to have all these babies here and celebrate them for the Eagles’ win and for these families who have new Super Bowl babies.” Everybody was doing their best Tracy Morgan impression on February 4th and getting everyone else pregnant.

The “Super Bowl babies” are coming according to the local news stations, nine months after Nick Foles led the Eagles to a 41-33 victory over Tom Brady and Bill Belichick’s New England Patriots. How does a dude impregnate a woman when they are blackout drunk on Yuengling and Astronaut cocktails made out of Tang from The Continental?

This new development makes the Patriots’ loss in Super Bowl LII even more devastating since they not only gave the Eagles their first Super Bowl championship but also littered the world to have more Eagles fans. Unfortunately, there is no previous data to scientifically declare if there is a correlation between births and Eagles’ Super Bowls.