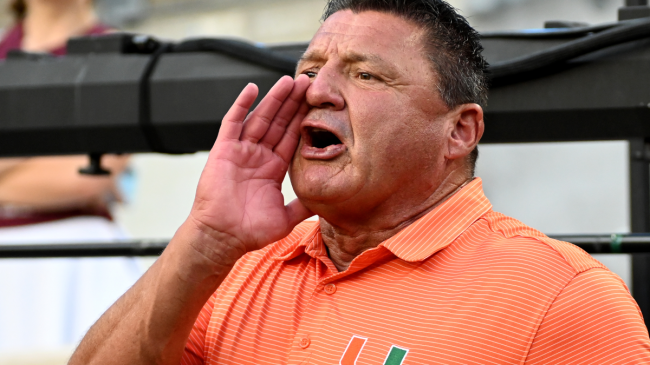 Ed Orgeron has lived the life as an NCAA coach, landing gig after gig in major party destinations. His two most recent head coaching roles came in Baton Rouge and Los Angeles, respectively. Not to mention assistant stops in Miami and New Orleans.

The Bayou native has thrived in those scenes due to his boisterous character and outgoing personality. He’s become somewhat of a boozing celebrity amongst college football fans, who wouldn’t think twice about inviting him to the tailgate.

This is the man that partied shirtless in Cabo for college spring break. The man who had viral photos of his late-night escapades paraded throughout social media. The guy knows how to have a good time.

If certain rumors turn out to be true, he’ll be tearing it up in a new party city very soon.

Ed Orgeron has been linked to the UNLV head coaching job.

Runnin’ Rebs contributor Andy Yamashita reports that Orgeron is one of the finalists for the opening, which would offer unbelievable entertainment should he eventually land the gig.

Imaging walking the strip only to see Coach O strolling out of the casino with a cold drink in one hand and eye candy on the other. What happens in Vegas, stays in Vegas.

Fans are already taking off with the report as they think the Orgeron would be in his element in Sin City. Check out some of the reaction below.

One fan said, “Coach O about to go buck wild on the strip,” while another wrote, “Hide ya daughters, hide ya wives,” to hearing that Ed Orgeron is being considered at UNLV.

This account commented, “Coach O in Vegas would be wild. Game ends by 4:00, Ed is in the Casino by 4:45.” I honestly can’t think of a better combination.

UNLV has struggled of late, posting just one winning season over the last two decades. Last year, the Rebels went 5-7, ending the Marcus Arroyo era. It would be a huge ‘get’ if they were able to land a national championship winning coach.

Ed Orgeron led LSU to the top of the college football world, and he’s got experience at major programs that could benefit UNLV. His recruiting prowess alone could be reason enough to pull the trigger as he’d be able to target the California area. We’ll see if an offer comes to fruition. Most college football fans are rooting for the partnership to happen.