The U.S. Olympic Flag Bearer Is The Best In The World, Here’s Why: 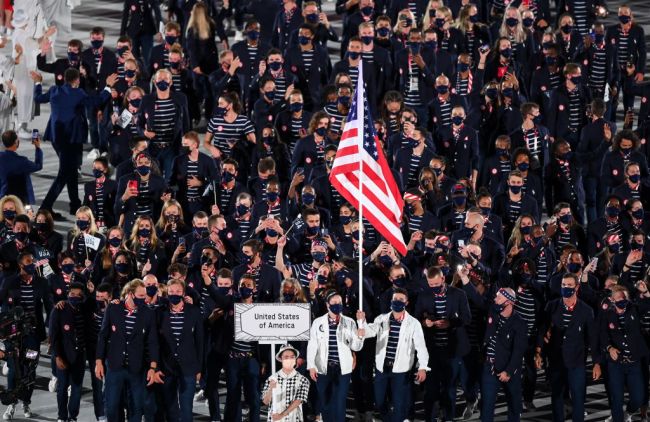 Eddy Alvarez is the U.S. Olympian and flag bearer that you’ve probably never heard of. The 31-year-old is one of the more unique stories of this year’s Olympics.

Alvarez stared rollerblading in Florida at the age of five. 24 years later, he won a medal in speed skating at the Winter Olympics in 2014.

Now, seven years after his silver medal in Sochi, he’s competing in Tokyo on the baseball diamond.

Alvarez, a first-generation Cuban American, grew up skating along the beach in Miami. He quickly learned he had a talent for the sport and would perform tricks for the crowds in South Beach, like jumping over boxes.

One day, as he was cruising around the streets, he was approached by a scout.

“Two ladies stopped my parents and said, ‘This kid needs to try the sport of inline speed skating,'” he said. “So I did, and I remember falling in love with it and the thrill of racing.”

In 2009, Alvarez won a gold medal in the 3000-meter relay at the World Junior Short Track Speed Skating Championships. In 2010, he finished seventh at the Olympic Trials.

After missing out on the team, Alvarez decided to take some time off and give his knees a break after years of chronic pain.

Baseball and battling back.

Choosing not to compete on the ice in 2011, Alvarez decided to walk on to the Salt Lake Community College baseball team. He had grown up playing the game and declined a full athletic scholarship to St. Thomas University as a shortstop, choosing then to focus on skating.

We've got ourselves a Marlins-related highlight tonight courtesy of Eddy Alvarez! 😀🇺🇸pic.twitter.com/7bedwFdMS1

Alvarez batted .303 in Utah but his knees did not improve. A doctor visit revealed multiple tears that would require surgery.

There was no guarantee that he would be able to skate or play baseball again. And yet, nearly nine months later, Alvarez had recovered enough to qualify for the U.S. Speed Skating World Cup team.

Alvarez’s recovery continued to trend upward and the surgery allowed him to compete without pain. By the end of 2013, he was ranked third overall on the U.S. team.

When the 2014 Winter Olympic Trials rolled around, Alvarez placed second in the 1500-meter and second in the 500-meter events. He became the first Cuban-American male speed skater to make a U.S. Olympic team.

The start to Alvarez’s Olympic career was tough. He was disqualified in his first race and fell in his second, third and fourth.

Despite the struggles, Team USA advanced to the 5,000-meter relay final and finished 0.271 seconds behind Russia for silver.

After the Games, Alvarez returned to baseball.

He signed a minor league deal in 2014. After five years between A, AA and AAA ball, he made his MLB debut for his hometown Marlins in 2019 but struggled in the bigs.

Alvarez began the 2021 season on the AAA level and was named to the U.S. national baseball team roster in May. The team qualified for Tokyo in June and Alvarez became the 135th athlete to compete in both the Winter and Summer Olympics.

Baseball is returning to the Olympics for the first time since 2008 and the stars aligned for Alvarez. He was visibly moved when his coach told him that he had been selected as a flag bearer.

"To be able to lead #TeamUSA is an absolute honor."

During the opening ceremonies on Friday, Alvarez led Team USA into the arena alongside Sue Bird.

Team USA entered the Olympic Stadium for the #OpeningCeremony. Athletes were led by the basketball player Sue Bird and the baseball player Eddy Alvarez, who held the American flag.

This year’s delegation is one of the biggest ever, with 613 athletes.https://t.co/QSI9o0jxxi pic.twitter.com/R3Wh5OxIwL

Alvarez and Team USA are expected to medal in baseball. Should that be the case, Alvarez will become the first Winter/Summer medalist since 1936.

Click HERE for our full Olympic preview and ‘who to root for’ guide!