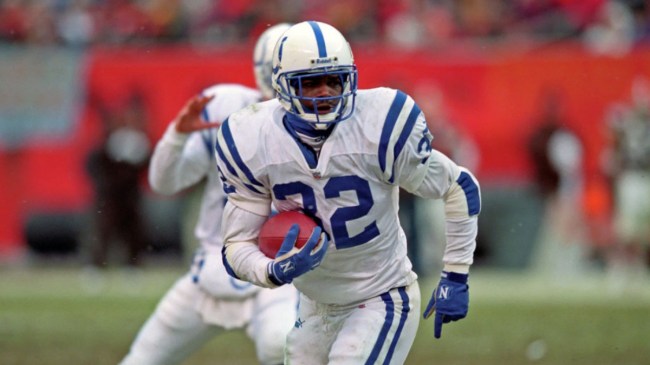 As the basketball waits o learn where the son of a future Hall of Famer will choose to play his college basketball, the son of somebody currently in a Hall of Fame has stolen the spotlight with an announcement of his own.

Last night, Edgerrin James Jr, the son of legendary NFL running back Edgerrin James, announced that he would be committing to play college basketball for the Cincinnati Bearcats.

James Jr is currently playing basketball at Olympia High School in Florida. During his career at Olympia, “Jizzle” drew quite a bit of interest from schools all over the eastern side of the country.

During his time with Olympia, James Jr received offers from Florida Gulf Coast, Providence, Georgetown, Georgia, NC State, Ole Miss, and Tulsa and had also reportedly gotten some interest from Florida and LSU. Surprisingly, his father’s alma mater, Miami, was not on his list of offers.

Edgerrin James Jr is the 64th overall recruit in the Class of 2023, the 10th ranked point guard, and the 6th ranked recruit from Florida, but he isn’t the first big signing Cincinnati has made for their 2023 class.

Commitments from these 2 are big wins from a Cincinnati program that didn’t land a single recruit inside the top 100 in this year’s recruiting class. It’s also a program that is trying to get themselves back in contention in the AAC after a disappointing 2021-22 season that saw them finish 8th in the conference with an 18-15 record.

Maybe Edgerrin James Jr and Rayvon Griffin are just what this program needs to turn things around.