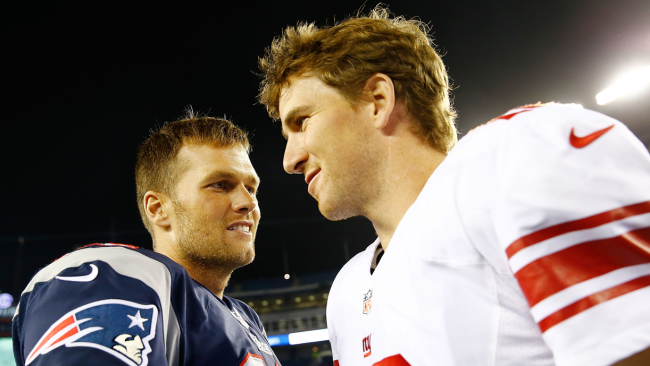 The rivalry between Tom Brady and the Manning brothers, Peyton and Eli, was one of the most fun to watch over the past couple of decades.

Despite battling it out, or perhaps because of that, the three legendary quarterbacks formed a unique bond filled with trash talk, jokes, and, most of all, respect.

Of course, a lot of that trash talk and respect stems from the fact that Peyton Manning and Tom Brady were in the same division for so many years, plus the fact that Eli Manning beat Brady in both of the Super Bowls in which they faced one another.

“I’ve been around Tom numerous times, and I’ve never brought up a Super Bowl or our games versus them,” Eli Manning said in January of last year. “He actually brings it up. It still bothers him a little bit, especially the ’07 one when they had the chance to go down as the greatest team of all time.”

Peyton Manning, while he did not defeat Brady in any Super Bowls, did go 3-2 against TB12 in the playoffs (wins coming in 2006, 2013 and 2015 – all three in the AFC Championship Game), so he too was a major roadblock in Brady’s quest to win as many Super Bowls as possible.

Which is why, during Julian Edelman’s new podcast Games with Names, Eli Manning joked that Tom Brady hates his mom Olivia.

“I mean you’ve obviously been around Tom a bunch, and I’ve been around him and I never mention that game to him,” Manning told Edelman, echoing something he has said before.

“That game, especially that one just because they win that game (Super Bowl XLII), they go down as the greatest team in the history of the NFL and they can’t say that because the Dolphins still have that undefeated season. I got more letters from old Dolphins players and coaches and every time I saw them, they’d thank me.

“And I see Brady, he’s like, ‘that freaking ’07 season Super Bowl,’ it hurts him still, which is good. I kind of like having that. I like that part of it.”

When asked if he, Peyton and the rest of the Manning family sit around at things like cookouts talking about how much they hate Tom Brady, Eli said they don’t.

“We respect Tom. What’s to hate about him? Good looking guy who just throws spirals and wins games? How do you hate that guy?

“He hates us. He hates my mom,” Manning then joked. “If it weren’t for Olivia Manning, Tom would have like twelve Super Bowls probably.”

Eli’s not wrong… at least about the Super Bowls.