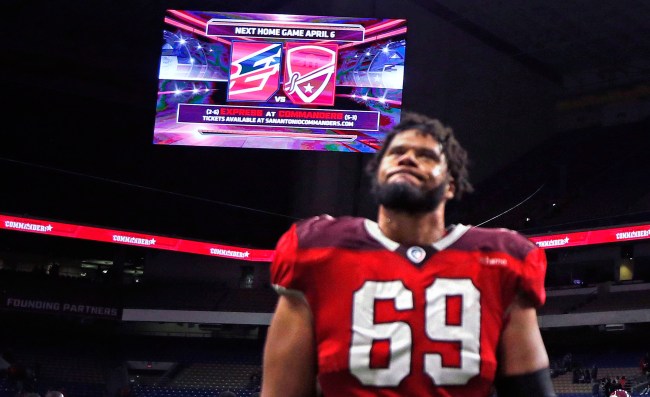 Only two weeks into the inaugural Alliance of American Football season reports surfaced that the league was already in dire need of a money infusion.

In stepped Carolina Hurricanes owner Tom Dundon, who reportedly invested $250 million, seemingly assuring that the AAF would be able to finish its first season.

Two weeks ago, the league even proudly announced that the title game would be held on April 27 at the Dallas Cowboys’ 12,000-seat practice facility. (Yes, really.)

And now the league is dead (even with Eminem’s great fighting idea), in large part due to the man who who was expected to save it: Dundon.

On Tuesday, the AAF sent a memo via email to its employees discussing the league’s suspension of operations.

In the email, the league told its staff said that that they would “seek new investment capital and restructure” and “should those efforts prove successful” they look forward to working with many of them on season two. As if that’s going to happen.

The email #AAF employees were sent minutes ago, announcing the almost assured end of their inaugural season and the immediate suspension of their league’s operations. (Via an AAF source.) pic.twitter.com/iS2rPzXy4d

Players looking for some sort of severance play (or flights home) are simply out of luck.

AAF players contracts are immediately terminated and there is no severance pay. Last paycheck was for last week’s game.

“I am extremely disappointed to learn Tom Dundon has decided to suspend all football operations of the Alliance of American Football,” Polian wrote. “When Mr. Dundon took over, it was the belief of my co-founder, Charlie Ebersol, and myself that we would finish the season, pay our creditors, and make the necessary adjustments to move forward in a manner that made economic sense for all.”

Also unhappy with this move was Orlando Apollos head coach Steve Spurrier, who came out of retirement for the AAF, telling the Orlando Sentinel, ““Everybody wanted to play out the season and everybody is disappointed. Everyone was led to believe that the Alliance was well-funded and we could play three years without making any money and this, that and the other. Obviously, everything that was said was not very truthful.”

Back in February, AAF CEO and co-founder Charlie Ebersol told The DA Show after the league’s first week, “I had to send an email on Sunday night that said, ‘Don’t gloat. You guys need to be careful because we have to live on both sides.’ Ultimately, here’s the thing about this: the media and the public perception is fickle. My friend, who is one of the top executives at Twitter, called me and said, ‘We have rarely, if ever, seen this level of positivity. You’re 11 of the top 20 trending topics on Twitter, and all 11 are positive.’ He said, ‘Be careful because this will turn.’”

Little did he know.