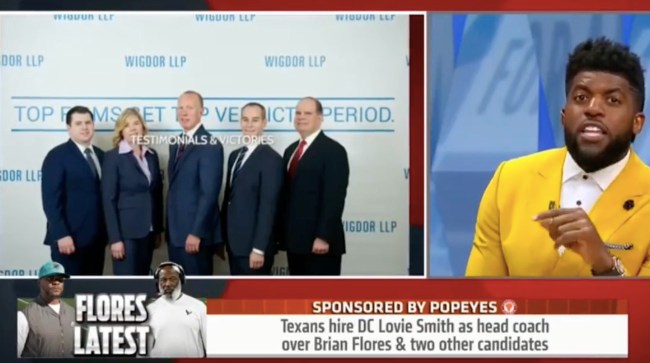 Emmanuel Acho, a former linebacker who played three seasons in the National Football League after being drafted by the Cleveland Browns in the sixth round of the 2012 NFL Draft, recently used his platform of Fox Sports 1’s morning show Speak For Yourself to call out Brian Flores.

Flores, the former Miami Dolphins head coach who is suing the league over alleged racism in the hiring process — he claims that the New York Giants put him through a “sham” interview and that Denver Broncos executives showed up hungover to a 2019 interview — is not practicing what he’s preaching, according to Acho, who called out the 40-year-old former Patriots assistant coach for using a law firm that does not employ any Black people.

Acho says he made this realization after clicking around on the law firm’s website, Wigdorlaw.com.

“Here’s my issue with Brian Flores and how this has all played out,” Acho said on FS1’s Speak For Yourself this week. “I did a little perusing of the law firm that’s representing Brian Flores and I noticed a complete, utter lack of diversity in that law firm.”

“All of the partners of that law firm are white. And if you go to the law firm’s webpage, every person of the 19 people on that webpage: you will not find one Black person. So, wait a second, Brian Flores: you are suing the NFL because of lack of diversity and your representation in suing the NFL lacks diversity,” Acho continued.

“Somebody gotta make it make sense. That’s the only part that truly irks me: how can you sue the NFL for lacking diversity in the head coaching rankings but the representation you have suing the NFL has less diversity than the NFL in which you’re suing. The law firm has six partners: none of these partners are Black. The head of marketing is not Black. None of the paralegals are Black. None of the attornies are Black. 19 individuals on that page and you do not see one Black individual, and yet they’re representing you in a case against the NFL for a lack of Black individuals,” Acho’s rant concluded.

Brian Flores sued the @NFL because the NFL lacks black head coaches, but a law firm representing him has no black employees. Hmmm… pic.twitter.com/DHq8wX0GvY

Given that it’s only been about a week since Flores filed the lawsuit, we’re way closer to the beginning of this saga than the end.