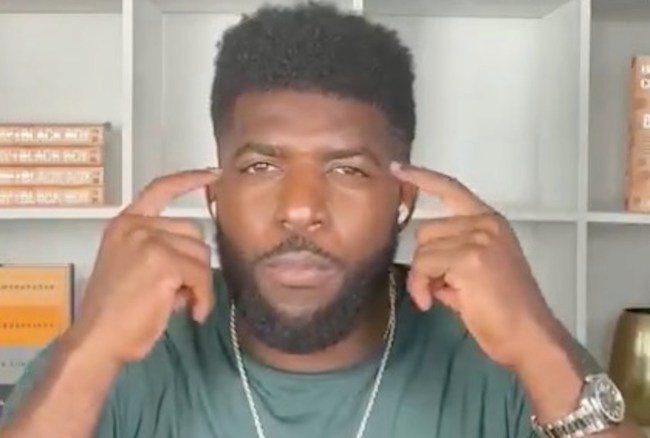 I’ve smoked weed for quite some time now. Perhaps longer than I’d like to admit here on the world wide web. Everyone has their reasons and I’ve had mine. Given the way in which prescription pills have ravaged this country in recent decades, perhaps weed smokers were actually ahead of the curve when it comes to self-care. But that’s not for me, nor you, to judge.

What we can certainly judge, though, was a truly befuddling weed take from Fox Sports football analyst Emmanuel Acho, who unequivocally had one of the most absurd responses to the whole Sha’Carri Richardson-suspended-from-the-Olympics-because-of-weed situation.

On July 2, just a day after it was announced that the 21-year-old Richardson would not be allowed to compete at this Summer’s Tokyo Olympics because of a positive weed test, Acho tweeted and deleted the following scorcher (which was accompanied by a video of one of his Fox Sports segments):

Needless to say, Acho was turned into a viral meme almost immediately, as the notion of getting high and tossing javelins seemed to immediately tickle the internet’s funny bone:

Are you saying that someone is going to get high and kill someone with a Javelin? If so, Do you have ANY IDEA how fucking hilarious you saying that is. REFER MADNESS! 😂😂😂😂😂😂😂😂😂😂 https://t.co/XxMi3KfAit

When I’ve taken one (1) weed and purchased one (1) javelin pic.twitter.com/o0ZQh6Dbjr

About to go javelin throwing pic.twitter.com/NQFpUIDoBQ

Very dangerous. Just look what happened at the last Olympics, a very real phenomenon that happens all the time: https://t.co/Hij2Ghz2xG pic.twitter.com/xffk06AlW7

laughing hysterically imagining someone getting impaled with a javelin thrown by a stoned person https://t.co/MfjwSYF57R

man thought weed was that savage drug from zootopia 😂😂😂

After spending the weekend as the subject of Twitter’s ire, Acho has apparently pulled a 180 on weed, as he posted a Twitter video on Sunday night thanking the internet for “shaming” him, which in turn led him to further educate himself on the issue of marijuana:

Thank y’all for shaming my opinion on weed. You shamed me into doing more research.

The racism behind criminalizing weed in America… pic.twitter.com/TFgGMMvyTM

It just goes to show that in the year 2021, nothing will cause you to change your tune faster than being ruthlessly turned into a meme.

RELATED: Australian Journalist Claire Lehmann Enrages The Internet For Suggesting Sha’Carri Richardson Is Using Steroids Because She Has Long Nails