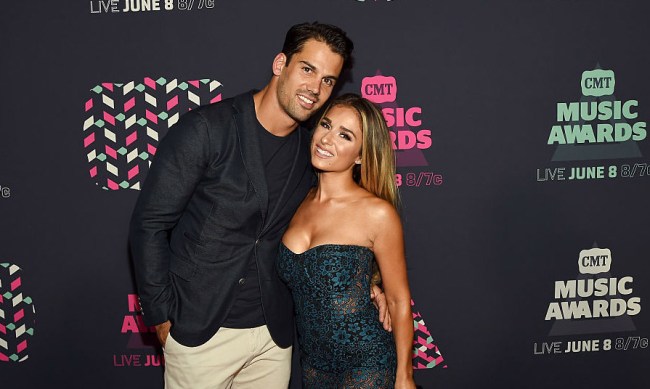 What other WAG out there talks about what she did when a fan sent her husband, Eric Decker, a nude DM? Or admits that she has to schedule times to have sex with her husband? Or brags about the size of her husband’s hog when he scores a TD?

You see what I am getting at here, right? She’s awesome.

Well, apparently Jessie and Eric have their own television show. Why? I have no idea, but they do. And on this show, Jessie decided to play a little prank on her husband for Father’s Day after he screwed up her Mother’s Day gift.

As you could tell, that didn’t go over very well with Jessie so she decided to exact some payback involving a couple of massage therapists.

Here’s how it went down…

“Your skin is taking the lotion really well. You don’t really need that much, it’s pretty soft,” the massage therapist says to Jessie. “I got a private studio at my house.”

When Jessie says, “Whoa, that’s my boob there,” it’s all about over for Eric. “I’m about to take him outside and let him know that he’s not welcome back to our house,” he warns.

Then Jessie asks the masseur, “Do you need me to take my panties off?” Annnnd that’s where he lost it…