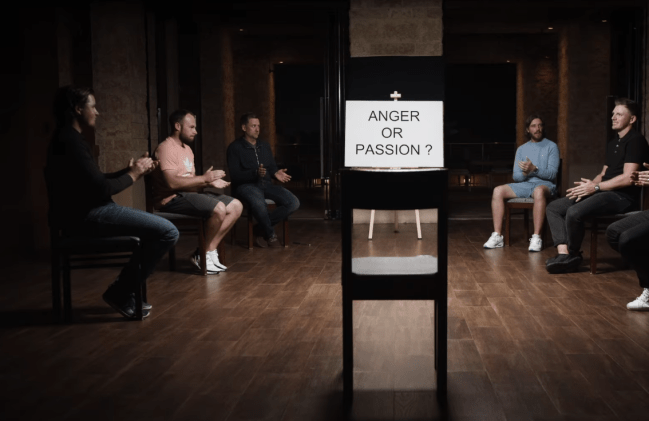 The European Tour’s presence on social media and in the video arena as a whole is beyond next-level. Each and every time the Tour publishes a new video, it’s gold, they simply do not miss. Over the years we’ve seen a number of memorable videos, but their latest sketch called ‘Angry Golfers’ just took over the top spot in the power rankings.

Tommy Fleetwood leads the meeting alongside the likes of Tyrrell Hatton, Henrik Stenson, Matt Wallace, Eddie Pepperell, and Ian Poulter. Hatton’s frustrations on the course are well-documented, Pepperell is known for getting loose on Twitter, Wallace berated his caddie back in 2019 and seems to get a new one every other week, Stenson isn’t a stranger to snapping clubs, and Poulter is just one of the best characters the game has ever seen.

The video takes hilarious digs at all of them and the acting from all six of the guys is phenomenal. Hatton absolutely steals the show, however, as he sits there like a sad puppy throughout the video shrugging off answers. Martin Kaymer, notorious nice guy, also makes a funny appearance in the video.

I’m not exaggerating at all when I say this video is Oscar-worthy.

It’s never not awesome seeing some of the best players in the world put together a hysterical video like this. You can clearly see that these guys loved every second of filming the video. Hats off to the European Tour’s team for coming up with the sketch and hats off to the players for giving up some time to put the video together.