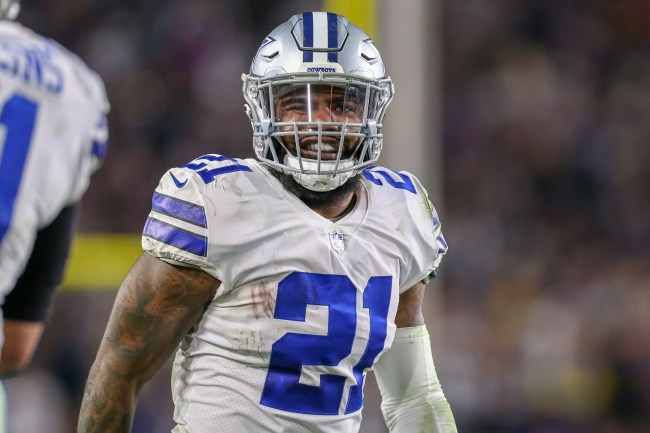 It looks like Ezekiel Elliott is on his way to becoming the highest-paid running back in the league.

During Labor Day weekend. the Cowboys and Elliott were hard at work trying to finalize a deal according to NFL.com’s Ian Rapoport.

“From what I’m told, Ezekiel Elliott’s camp and the Cowboys negotiated all weekend trying to strike a deal that would eventually make him the highest-paid running back in football,” . “I’m told there has been some progress there. They’re not there yet. Certainly, there has been plenty of frayed nerves along the way, plenty of those. But both sides are trying to get this thing done before the season starts. Today obviously will be a huge, huge day, the start of the game week. And the Cowboys would like him in sooner rather than later.”

The Dallas Morning News confirmed that there was “progress” made but that the two camps were still pretty far apart to the guaranteed money that Elliott wants.

There is some progress being made in talks between running back Ezekiel Elliott and the Cowboys. While still apart on overall size of the contract, the two sides are closer on guaranteed money but need more work on coming to terms on average salary, according to sources.

Early this morning, FS1’s Shannon Sharpe claims that Elliott is on the verge os signing a “monster” 7-year deal that would pay him more than Todd Gurley.

"I received some information that Zeke and his team are on their way back to Dallas. It's going to be a 7-year deal and it'll be a mega deal, one that's going to shock a lot of people… I do believe Zeke Elliott will carry the ball on Sunday for the Cowboys." — @ShannonSharpe pic.twitter.com/QHLyFeSrid

While no other reporter has confirmed Sharpe’s report, Pro Football Talk says he’s hearing that Zeke has been offered a 6-year $90 million deal.

Source with direct knowledge of situation when asked whether this is accurate said, "Not done, but close." https://t.co/jOexo1OZfQ