Fans Run On Field Twice During Subway Series Game, Both Get Ragdolled By Security 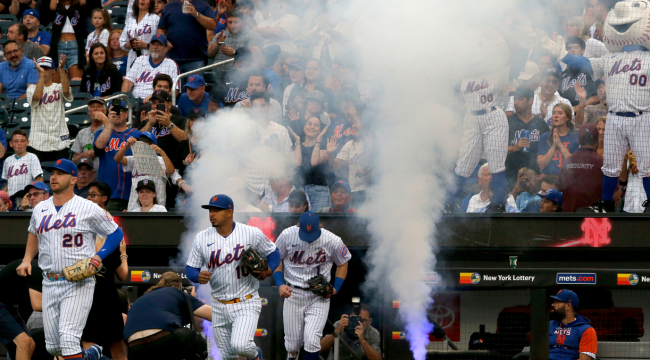 Question: Has a fan running on to the field of play during a professional sporting event ever not ended badly for that person?

The answer, of course, is no. Yet here we are, once again, talking about someone running on the field only to get obliterated by security.

It occurred in the bottom of the 7th inning just after new Yankees outfielder Andrew Benintendi smacked a RBI single to right field, giving the Yankees a 3-2 lead.

The fan leaped over the outfield wall and tried to run around on the field in the vicinity of Mets right fielder Starling Marte.

His adventure didn’t last very long as security was quick to pounce, as Yankees broadcaster Michael Kay told the viewing audience the fan was “promptly removed.”

However, based on several videos taken by other fans at the game, the fan may have been promptly captured by security, his actual removal was anything but quick as he put up a valiant fight.

After being corralled, the fan was being escorted off the field by one security guard who had him in some sort of arm lock when he gave it one more shot and fell to the ground trying to escape.

Alas, two more security personnel quickly hopped back into the fray and the fan was finally taken off the field.

Fan who ran on the field was putting security to work last night at Yankee Stadium. What a fool. pic.twitter.com/AzHEhM3Twi

Fan on the field got LEVELED by security. Wow. pic.twitter.com/dwS2rzYvcE

The New York Post reports that the fan could face a criminal trespassing charge, a night in jail, and a lifetime ban from Yankee Stadium.

The best part of the entire video was perhaps the reaction of Mets outfielder Starling Marte.

The way marte is just standing there watching💀

I love how Marte is staring at it happening lol

you drink one beer with a hot dog.

No, sorry, it wasn’t that guy.

The funny thing is, he wasn’t even the first fan to run on to the field Monday night at the Mets game.

He risked it all with very little hesitation pic.twitter.com/2VxwnTaG3d