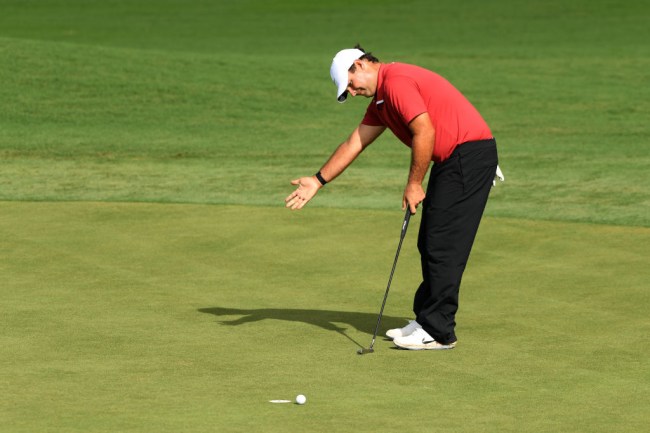 It’s been a wild few weeks for Patrick Reed, to say the least.

The drama started at the Hero World Challenge in the Bahamas when he was caught cheating by improving his lie in a waste bunker. That incident happened one week prior to the Presidents Cup in Australia where the International fans really let him have it and things escalated on the second day of action when his caddie, who is also his brother-in-law, got into an altercation with a fan and was forced off the bag for Sunday’s singles matches.

Add those two most recent cases onto Reed’s resume, which plenty of fans already weren’t big fans of, and things are going to get a bit hostile out there on the course.

We witnessed one of those hostile moments on Sunday afternoon on the final playoff hole at the Sentry Tournament of Champions.

After Xander Schauffele was eliminated from the playoff after the first extra hole, it came down to Justin Thomas and Reed. After forcing it into a third playoff hole, the two faced birdie putts on the 18th green yet again. Thomas’ was a near kick-in while Reed faced a tricky, downhill and downwind slider from eight feet.

Just after he hit the must-have putt, a fan screamed ‘cheater’ at Reed which was clearly picked up on the broadcast.

You have to tip your cap to Dan Hicks on the broadcast by pointing out the fan yelling ‘cheater’ at him instead of completely ignoring the very loud shout from the gallery.

Reed went on to make his par putt coming back up the hill, but Thomas drained his birdie putt for the win as he picked up his 12th win on the PGA Tour.

Thomas said that he didn’t hear the fan yell at Reed.

Reed's heckler was loud and clear on TV––and Reed turned and glared afterward––but with a putt to win, JT said he never heard the fan scream, “Cheater!" pic.twitter.com/mYPSD059bY

While Reed fired the low-round of the day on Sunday, a seven-under 66, the drama in the playoff and the ‘cheater’ shout will be the story of what was the 2020 Sentry Tournament of Champions.