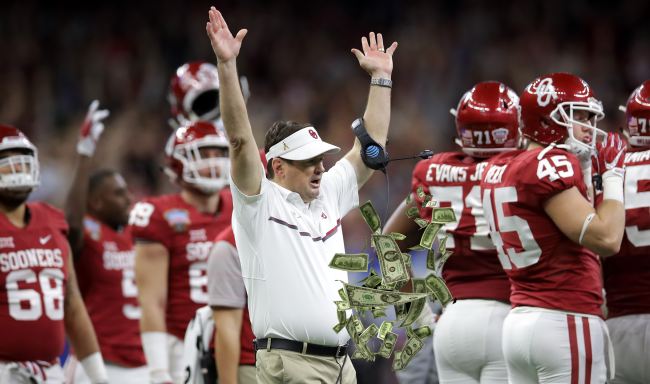 Bob Stoops is a bit of a legend around Norman, Oklahoma. Putting together a 190–48 record over 18 seasons as the head coach of the Sooners will do that. So many fans were happy to hear that he will be taking over interim coaching duties for the university’s upcoming bowl game.

With the departure of coach Lincoln Riley to USC, much to the dismay of the Amish community in Oklahoma, the Sooners really couldn’t have done much better than “Big Game Bob” as a one-game replacement.

After all, with his past record, plus the fact that he has been serving as the … deep breath … Special Assistant to the Vice President for Intercollegiate Athletics Programs and Director of Athletics at Oklahoma since his retirement from coaching (in college) in 2017.

Throw in his time spent as the head coach/general manager of the Dallas Renegades in the XFL and Stoops was a no brainer.

Related: Oklahoma’s Next Head Football Coach Is Set To Inherit An Office That Is Serious Goals

The only question left to be answered with regard to his return to the sidelines is, how much should the University of Oklahoma pay him?

Turns out, the answer appears to be… a lot.

According to OU Daily, The OU Board of Regents will meet on Dec. 2 and as part of the agenda will be Stoops’ compensation for coaching that one game.

In addition to votes on a $16 million budget for upgrades and renovations to OU athletic facilities, “The Regents will also vote on a compensation fee for Bob Stoops, the newly named football interim head coach as of Nov. 28 following the departure of now-USC head coach Lincoln Riley for the Sooners bowl game. Stoops will be given a $325,000 bonus for the game on top of his current salary as the special assistant to the vice president for intercollegiate athletics programs and director of athletics.”

$325K. To coach one college football game. Coincidentally, when Stoops took the job as Special Assistant to the blah, blah, blah his salary was pegged at $325K. He later voluntarily took a pay decrease down to $162,000 while he was coaching the Renegades.

Does that seem like a lot of money to coach one game? Especially when the players Stoops will be coaching receive zero salary?

Not to most Oklahoma Sooners fans!

Double it. And give him another statue.

seems a bit low for Stoops.

Worth every penny. Love Coach Stoops!

Coach came out of retirement, got to work to salvage the players we currently have; left that day to recruit across the country; keeping a staff to plan for a game; and is coaching a bowl game. Seems to me that $325k is a little light for the work being done.

For those saying $325 is low, sure it seems that way but you don’t think Bob had his say in that? He’s doing this because he loves the university. For all we know he insisted to not be paid much. He and Joe are close so he’s not going to get screwed over.

Meanwhile, the The Accessibility and Disability Resource Center is so understaffed they have to beg other departments for help.