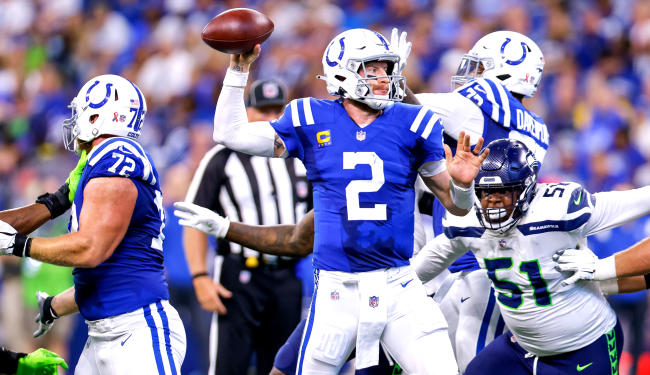 2021 marks 20 years since HBO’s popular NFL docuseries Hard Knocks debuted by following and filming the Baltimore Ravens as the team prepared to try and repeat as Super Bowl champions.

However, none of the Hard Knocks episodes were filmed and aired in the middle of the NFL season. Until now.

Thursday night, during the game between the New York Giants and Washington Football Team, it was revealed that the Indianapolis Colts will be the subject of a new, in-season edition of Hard Knocks.

Related: All The Details Behind The Insane Drone Shot Of The Dallas Cowboys Facility Featured On ‘Hard Knocks’

Fans of the show need not worry about this latest iteration of Hard Knocks replacing the preseason versions they’ve become accustomed to as HBO says this in-season version is just a new addition to the series.

“We could not be more thrilled to bring Hard Knocks and the remarkable behind-the-scenes access it provides for the entirety of an NFL season,” NFL Films senior executive Ross Ketover said in a statement. “Thanks to HBO, along with the incredible cooperation from the Colts, we are able to deliver a groundbreaking new edition of the series.”

Colts fans, and others who follow the NFL, weren’t quite sure what to make of this news.

Peyton NEVER would have agreed to that. No way in hell he'd want cameras in meeting rooms and at his practices

Why did they choose one of the most uninteresting teams

Putting a tent around this circus. Nice

you know how that Netflix F1 show turned some of our seemingly normal friends into people who wake up really early on weekend mornings to watch European car racing? what if in-season Hard Knocks turns random Europeans into diehard Colts fans

If this new Hard Knocks format sounds familiar it may be because NFL Films has already done something very similar with Amazon Prime Video’s All or Nothing docuseries.

All or Nothing aired from 2015 to 2019 and featured the Arizona Cardinals, Los Angeles Rams, Dallas Cowboys, Carolina Panthers, and Philadelphia Eagles.

The big difference with Hard Knocks airing in-season with the Colts is the fact that All or Nothing episodes did not get released until until the following summer.

The first episode of this new in-season Hard Knocks featuring the Colts will begin airing on Novemeber 17 with new episodes airing on each following Wednesday.