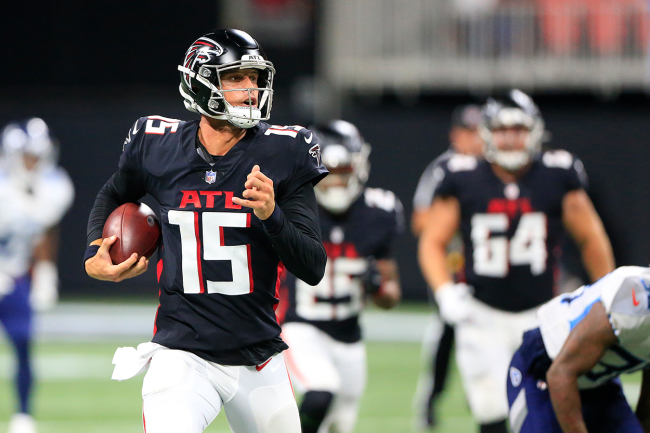 The Atlanta Falcons had three quarterbacks on their roster when they opened training camp this week. However, one of them is not playing quarterback full-time.

Earlier this year, the organization decided to move former SEC starting quarterback Feleipe Franks to tight end. It is a unique experiment, considering that he has never played the position, but he has the size, frame and athleticism to potentially make it work.

Franks, who stands 6-foot-7, 228 pounds, has a frame that translates well to the pass-catching role. He also ran a 4.61-second 40-yard dash during the 2020 NFL Combine, which is the exact same time as NFL superstar tight end Travis Kelce.

While there is still a long way to go before the season begins, Franks appears to be on track to make the 53-man roster. He has been getting a lot of reps as a pass-catcher and appears to be picking up his new position fairly quickly.

Although Franks’ best chance to make the team is at tight end, that doesn’t mean that he is completely abandoning the position he has played his entire life.

Falcons head coach Arthur Smith said that on Wednesday that the team still plans to have him play some quarterback so that he can be the emergency third-stringer behind Marcus Mariota and Desmond Ridder. But through the first few days of training camp, he has only played tight end.

Arthur Smith confirms Feleipe Franks is still going to play some QB. They'll continue to get him reps throughout camp. He was playing entirely at TE today. #Falcons

Franks, who was the starting quarterback for three years at Florida under Dan Mullen and one, COVID-19 shortened year at Arkansas, was a former four-star recruit. He is an athlete and if there is anyone who could make the position switch work, it’s Franks.

In the first look at Atlanta’s new tight end during training camp, it would seem as though he is doing well out of the gates. A video posted on Thursday shows Franks reach back and make a sure-handed catch before turning up field and putting out a stiff-arm.

Franks at TE with the hands and stiff 💪 pic.twitter.com/MdbAfe7pQE

Obviously, one play from one non-padded practice doesn’t mean that Franks is on his way to becoming a first ballot Hall of Fame tight end. But it also doesn’t mean that the Falcons and their fanbase can’t be excited about his potential.