The Internet’s Convinced Max Kellerman Couldn’t Stop Farting On ‘First Take’, And I Tend To Agree 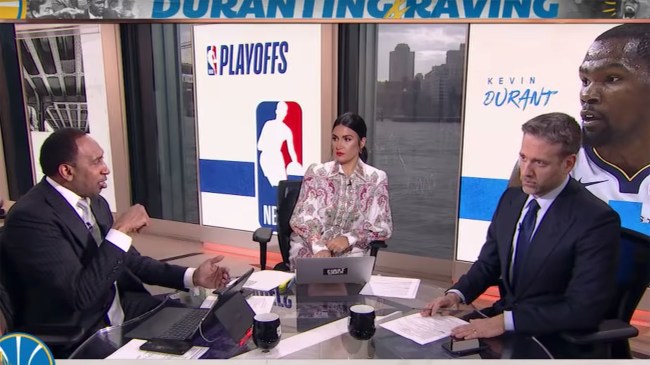 ESPNs popular debate show, First Take, often gives us a lot of interesting moments. From Stephen A. Smith ranting about God knows what, to Max Kellerman playing the role of antagonist with that sly smirk of his anytime he’s talking, to host Molly Qerim always looking incredible while trying to mediate the entire show, people can’t get enough of the things that happen on First Take each day.

Personally, I’m more of a Pardon the Interruption guy myself — because it’s less screaming and more rational sports thoughts — but that’s a conversation for another day. And, after hearing what appeared to have happened on yesterday’s First Take, you might be more inclined to watching something else, too.

That’s because, after watching video of a segment about the Golden State Warriors-Los Angeles Clippers series, Max Kellerman appeared to have farted. No, let me update that: he absolutely farted, and the Internet helped convince me of it. Just take a listen to the video below and hear for yourself what went down (and came out) on First Take yesterday — with the fart occurring at the 5:50 mark).

Now, say what you want to about if it was or wasn’t a fart, but tell me that the mindless, fake writing on his paper isn’t a dead giveaway that something’s brewing. And if that isn’t enough evidence for you, tell me that the picture below isn’t the face of a man who knows that he just can’t hold back a little booty trumpet.

It’s one thing to fart on national TV, it’s another to try and cover it up with a cough. That’s the kind of stuff you learn from your grandpa when you’re a kid, but, hey, it is effective. Too bad for Max Kellerman it didn’t work, because anyone watching First Take heard it, and, because of that, this segment has landed the video in the top-10 watched on YouTube over the past 24 hours. Farts are funny, guys, and this proves it.

Apparently, the fart we heard on First Take wasn’t the only one that Max Kellerman let loose, because, thanks to Reddit user YaBoiMirakek, we had a full breakdown of the exact moments the ESPN personality may have been ripping ’em. You’ve just got to love the Internet for doing things like this, because, deep down, we’re all just 13-year-olds who love bathroom humor.