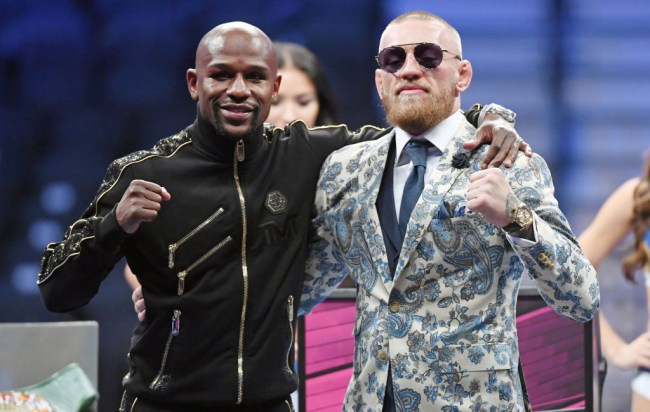 Floyd Mayweather was extremely confident in his abilities to defeat Conor McGregor in their much-hyped fight in Las Vegas on August 26, and justifiably so. Mayweather was so confident that he was out partying into the wee hours of the morning and hitting up strip clubs only two weeks before the fight. IBO super-middleweight title-holder Chris Eubank Jr. couldn’t believe he saw Mayweather out partying only days before the big McGregor fight.

Eubank traveled from England to Floyd Mayweather’s gym in Las Vegas. While he was in Vegas, the British boxer was amazed to witness Mayweather walk out of the Girl Collection strip club, an establishment that Floyd owns, at 5 in the morning. Maybe Mayweather was just being a wise entrepreneur and doing some extensive quality control on his enterprise?

Eubank told the Daily Mail about seeing Money Mayweather at the strip club and at a pool party only two weeks before the fight.

“Two weeks before the fight, I watched him walk out of the strip club at five in the morning. It’s surreal. It’s like, ‘Jesus.’ Then the next week, he’s at a pool party. He’s not drinking and he’s got his section up at the top and he’s just chilling and stuff. But it’s like, ‘You’re at a pool party and you’re about to fight in a week-and-a-half’s time. Who does that?’ Well, Floyd does that. Everybody is different and the thing with Floyd is, in a good way and a bad way – well, it’s good for him, obviously, because it works for him.”

Eubank delved into how special of a fighter Mayweather is to get away with continuing his partying lifestyle right before a huge fight, but it might be giving the wrong idea to young fighters including Gervonta “Tank” Davis, who idolizes the 40-year-old boxing legend.

“You have kids that are looking at [Mayweather’s lifestyle] and thinking, ‘Oh, I can do that. I can go to the club and party and do whatever I want and then fight.’ And you just can’t. You just can’t. With [Mayweather], I can pretty much guarantee you that lifestyle wasn’t how he got to where he is. He was doing it the right way – not the right way, because he’s still winning. … What he’s doing now is the right way for him. But the traditional way. That’s how he started and that’s how every fighter needs to start. And it worries me a bit with [Davis] because I know ‘Tank’ is spending a lot of time with Floyd, and he’s his hero, and a lot rubs off. And he’s a great talent, a lot of potential.”

The partying didn’t affect Mayweather’s performance one bit as he smoothly sailed to beating McGregor with a 10th-round technical knockout at T-Mobile Arena.