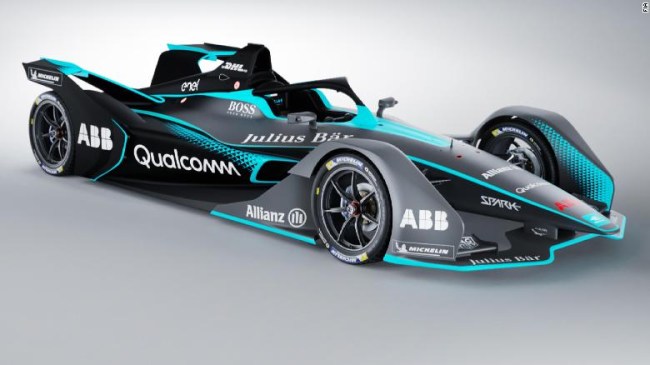 Wait till you get a load of these all-new, all-electric Formula E race cars. These futuristic vehicles look tremendous and some say they look like the Batmobile. Formula E unveiled the next generation racers that will hit the roads later this year. The second generation land rockets offer almost twice as much energy storage capacity and double the range. That means drivers will no longer have to make a mid-race car swap because of batteries going dead like first gen cars did when they first started racing in the end of 2014.

Formula E will start its fifth season, which kicks off the end of the year, with a completely redesigned race car. The ultramodern design with neon blue highlights looks like something out of Blade Runner 2049. But most people saw similarities between the new Formula E racers to Batman’s Batmobile. “Not sure if we will be racing or fighting the joker next year,” Team Andretti said. “Either way, we are excited!”

“Today we show for the first time the design of the next generation car, and I’m sure that everyone will be very excited by how futuristic and advanced it is,” said FIA president Jean Todt. “I’m very proud that the FIA has been at the forefront of this car’s development. It’s something new for the federation.”

The new longer-lasting battery is built by McLaren, and features a full power output of 250kW and equates to about 335 horsepower. This is 50 more kilowatts than the current car. The technical specifications weren’t released today, but they are expected to be revealed on March 6 at the 2018 Geneva Motor Show when they flaunt a real Formula E car. Formula E started four years ago and has raced in New York, Paris, London, Montreal, and will venture into Rome this season. Major auto manufacturers have competed in Formula E including Audi, Jaguar, and BMW. Mercedes-Benz and Porsche will join the circuit too.

The #Gen2 Formula E car – coming to a city near you in season five! #FIA #ABBFormulaE pic.twitter.com/DeM7ZR7Yd9

“This car represents the future of racing,” said Alejandro Agag, Founder & CEO of Formula E, of the vehicle that will be introduced for the 2018-19 championship. “When we started Formula E, our goal was to break the mould and challenge the status quo – bringing a revolution to motorsport. This next generation car represents that revolution.”