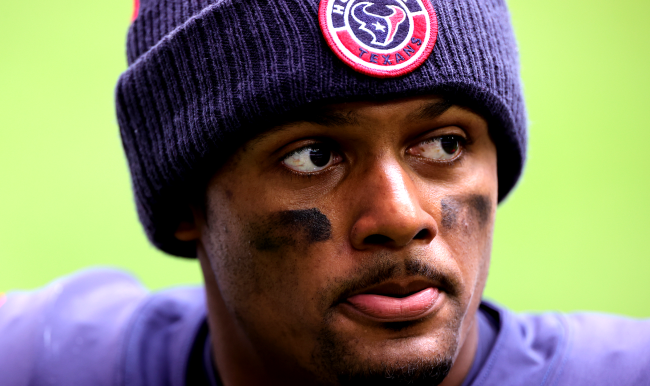 On Friday, the day after Texas attorney Tony Buzbee released alleged incriminating text messages sent from Deshaun Watson to some of the women accusing him of sexual assault, four more women have filed lawsuits against the Houston Texans quarterback.

The Houston Chronicle reports the four new lawsuits were all filed on Thursday and made available to the general public Friday morning.

In each suit, the women describe a situation in which Watson is almost completely in control, dictating their work and refusing to listen when he made them uncomfortable.

The first three lawsuits were similar: Two women said Watson touched them with his penis, and the third said he forced her to perform oral sex.

Related: The NFL Is Investigating Deshaun Watson After Lawyer Says 9 Women Are Ready To Sue Watson For Sexual Assault

Legal documents for one of the latest lawsuits claims Watson messaged a licensed sports massage therapist on social media in June of 2020.

He insisted on taking a shower, and when he came back, he was completely naked, she said in the lawsuit. She tried to cover him and he resisted, at times knocking the covering off his body, she said.

He told her to use her fingers only, not her knuckles and palms, and exposed his penis to her several times, she claims.

Watson continuously attempted to get her to touch his penis, and he eventually had an erection, according to the lawsuit. Multiple times he moved his body in a way to make his penis touch her, the woman said.

He attempted to contact her roughly seven more times to schedule more sessions, but the woman declined.

Another new lawsuit was filed by a licensed esthetician who claims Watson also contacted her via social media states in legal documents that Watson got an erection and asked the woman what she was going to do about it.

In a later appointment, the esthetician claims Watston tried to put his penis in her hand.

The third lawsuit filed on Thursday was by a woman who owns a fitness company that offers body conditioning and wellness therapy services.

She too says in legal documents that she was contacted on social media by Watson and during their session the quarterback again got an erection and moved his body in a way that would cause his penis to touch her hand.

The fourth woman, who specializes in body work and stretch therapy, claims in legal documents that Watson kissed her without consent and exposed himself to her despite her allegedly telling him that was unacceptable behavior. Again, Watson allegedly moved his body in a way that would cause his penis to touch her hand while receiving treatment.

Watson denied the first of the allegations made against him on Tuesday, and on Friday the quarterback’s rep David Mulugheta issued a new statement about the charges.

“Individuals fabricate stories in pursuit of financial gain often. Their victims should be heard, and those offenders also prosecuted.

“I simply hope we keep this same energy with the truth.”