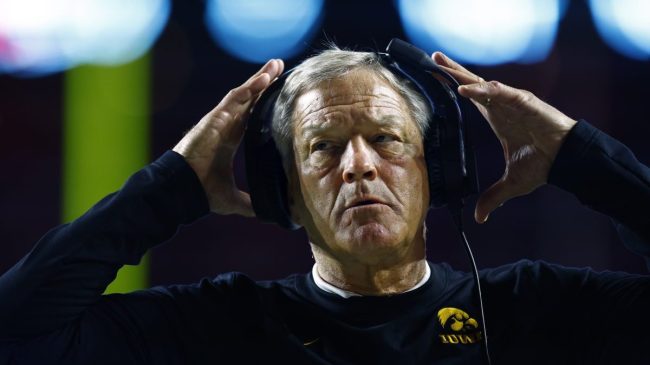 The Iowa Hawkeyes are bad. Not just bad, the Hawkeyes are really, really bad. While special teams and defense haven’t been a problem for Kirk Ferentz’s team this year, the offense has been an abject disaster.

Iowa is 3-1 this season but the Hawkeyes are averaging just 17 points per game. That average is boosted by a pair of 27-point performances against lowly Nevada and Rutgers.

So when the Hawkeyes fell behind fourth-ranked Michigan 7-0 on Saturday, many fans were already calling the game over.

To emphasize just how brutal the Iowa offense has been, FOX put out a graphic showing its Big Ten rank in a number of statistical categories. Rather than just saying 14th (out of 14 teams), the FOX producers had another idea.

I deeply respect saying LAST LAST LAST instead of 14th. Makes it sound so much worse. pic.twitter.com/gObkZj5kdO

Iowa’s offense is so bad that Jim Harbaugh shifted his game plan to account for the Hawekyes’ misery, pinning them inside the 10 rather than going for it on fourth down in Iowa territory.

But even Iowa fans knew that was the correct decision.

but, yes, forcing the Iowa offense to travel 90 yards is smart

harbaugh has a 7-0 lead, which may indeed be insurmountable https://t.co/QIZ26fp1PD

The joke will be on all of us when the Hawkeyes somehow win the absolutely putrid Big Ten West. But until then, let’s all enjoy just how historically bad that offense really is.