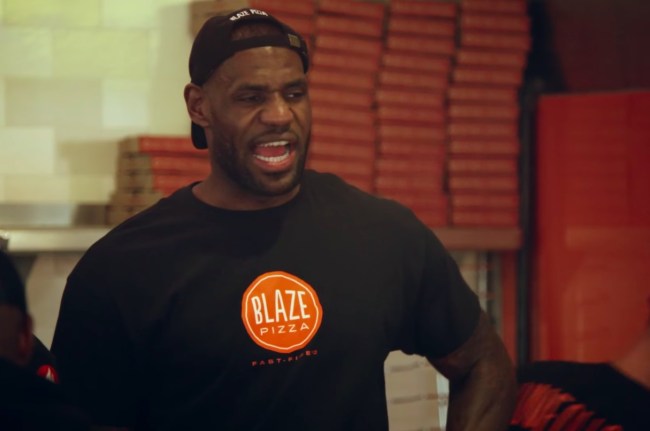 After waaaaaaaay too much speculation and drama, LeBron James officially announced he’d be defecting from the Cleveland Cavaliers yet again so he could take his talents to Venice Beach (and beyond) by joining the Los Angeles Lakers. If jersey sales are any indication, the team’s fans (and bandwagoners) are thrilled to have James join the squad— but that doesn’t necessarily mean everyone is happy about it.

There’s still apparently a large contingent of Lakers fans who put their loyalty to Kobe Bryant ahead of the good of the team— a phenomenon that has resulted in one guy repeatedly throwing his shoe at a mural and another who claimed a $300 bounty by defacing a freshly-painted portrait of The King in a Lakers uniform.

LeBron might not be able to please everyone, but he’s doing what he can to get into the good graces of Lakers fans with an offer virtually no one can refuse: free pizza. On Tuesday, the James-backed chain Blaze— which is basically the Chipotle of pizza— will be giving away free pies to commemorate LeBron’s move to the West Coast.

Unfortunately, the offer is only available at stores in the Los Angeles area, but there will be 50 locations participating in the promotion. If you want to take advantage of the offer, all you have to do is visit one of the restaurants between 2 and 5 PM (the only catch is that you have to order in person as opposed to online).

On Tuesday, LeBron teased he might make an appearance at the chain’s Culver City location if you happen to be in the area (or are a big fan of dealing with traffic in LA).

Haven’t been to a pizza party in a minute 🤔 Culver City? 👀🍕 https://t.co/1QxgALyekK

He might not be able to win over every Kobe stan but I guess you can’t please everyone.