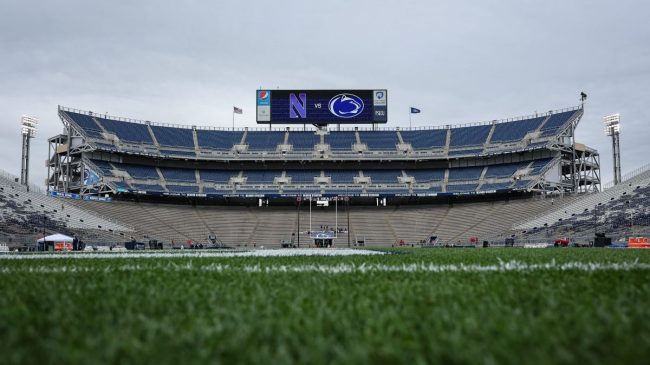 There are plenty of punters across the world of college football. But there are few, if any, punters quite like Penn State punter and kickoff specialist Gabe Nwosu.

That’s because Nwosu, a walk-on, is an absolute unit. The university lists the redshirt freshman at 6-foot-6, 278 pounds. After serving primarily as a practice squad player in 2021, Nwosu took over as the team’s kickoff specialist this season.

His emergence earned him plenty of recognition not only in Happy Valley, but also across the country. If there’s one thing that college football loves, it’s a special teams player that looks like they could start at defensive end.

And that love has landed Nwosu the absolutely perfect NIL deal.

The introduction of NIL to the college football world has brought us a number of fantastic storylines. Texas A&M is reportedly paying its players a jaw-dropping sum to play for the Aggies over anyone else. Texas star running back Bijan Robinson has his own Dijon mustard, which fans can now get on a corn dog at the Texas state fair.

But Nwosu’s deal might just be the best one yet.

Our sandwiches are bigger than the norm – so we knew we needed to bolster our special teams roster with a Pman-sized Kicker/Punter! Meet #PrimantiBrosOfficialAthlete Gabe Nwosu (@GabrielNwosu33)from Penn State. Welcome to the team, #99!#BigKickEnergy #WeAre pic.twitter.com/jmdqtIG5fG

The collaboration could not be any more perfect and it’s the reason why NIL has been so great for college football.