Genie Bouchard Makes It Instagram Official With Mason Rudolph, As Do Vanessa Hudgens And Cole Tucker 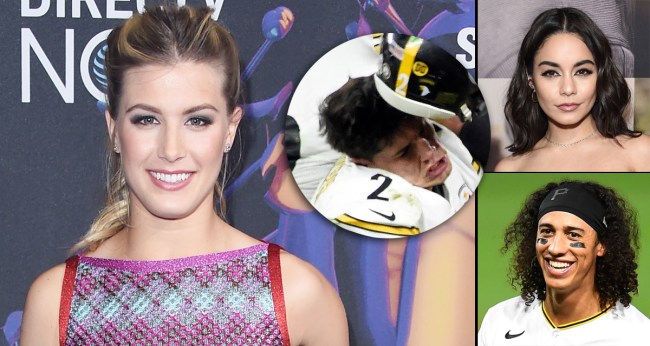 Welp, it’s true. We were pretty sure, but not 100 percent before. Tennis star Genie Bouchard is, in fact, dating Pittsburgh Steelers backup quarterback Mason Rudolph.

Rudolph, 25, has now earned $2,907,085 over three seasons in the NFL – or $14,463 for every pass he has completed. Dude has some serioous discretionary income, and Bouchard was openly desperate to have a boyfriend last year.

We know that Bouchard and Rudolph are actually dating now because Rudolph posted a photo on Sunday of the couple hanging out on a beach in Cabo San Lucas with the caption, “My Valentine.”

We know they were in Cabo because Bouchard, 26, shared her own photo from the locale, sans Rudloph, stating she was there with the caption, “quick vday getaway.”

Last year, Bouchard provided several clues that she was dating Rudolph with photos posted from Pittsburgh during football season, which, of course, Rudolph “liked.”

Back then, TMZ Sports reported that Bouchard and Rudolph “began a romantic fling recently … and have gotten pretty serious.”

So serious these days they are Instagram official, I guess.

In other famous people dating each other news, it was officially revealed over the Valentine’s weekend that 24-year-old Pittsburgh Pirates outfielder Cole Tucker is now dating actress Vanessa Hudgens, 32. Hudgens was at one point linked to Lakers star Kyle Kuzma.

I guess they have been together since late 2020.

“They rang in the New Year together,” a source told E! News.

Tucker carries a .215 batting average over 93 games in two years with the Pirates. He reportedly signed with Pittsburgh for $1.8 million in 2014.

It’s good to be a mediocre professional athlete.