Genie Bouchard Wishes She Had A Boyfriend During Self-Quarantine, Thirsty Dudes Everywhere Rush To Volunteer 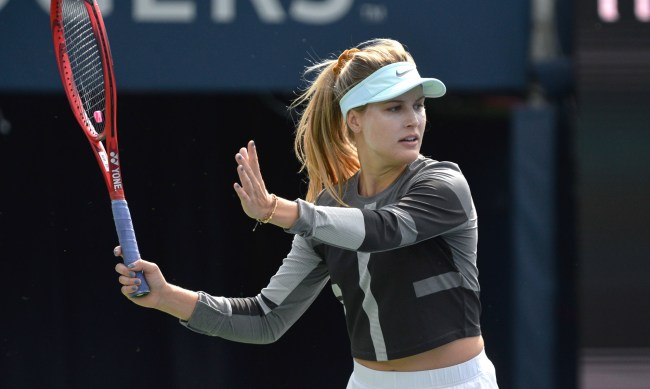 Popular tennis star Genie Bouchard, unlike all the idiots not taking things seriously these days in America, has found herself sitting around, looking for something to do while in self-quarantine.

So on Wednesday, Bouchard took to Twitter to express how much she wished she had a boyfriend to help her pass the time while on lockdown.

not complaining, but i feel like quarantine would be a lot more fun with a boyfriend

Yes, this was most certainly bait to see what kind of response she would get. There’s no way, with her past that she was not aware of exactly what she was doing.

That being said, Bouchard did go out on more than one date with some rando who made a Super Bowl bet with her. Heck, that story is even reportedly being made into a movie.

And as we’ve already seen this week, with basketball players Shareef O’Neal and Tyler Herro, now apparently is a really good time to shoot your shot.

Oh sure, we know that men more famous than we are have tried and failed with Bouchard (as far as we know), but what else have we got going on? Even if Genie shoots every guy who responded down, maybe her twin sister will be interested. One can dream, right?

The replies to this are almost certainly a shit show.

I’ve been told the internet is a great place for an adventure like that to start. pic.twitter.com/z6ZKc9XnGa

Heyyyyyyy Genie you know what’s my T-shirt made up of? It’s made up of boyfriend material haha pic.twitter.com/0LwqTsSvlm

Not bragging but I have 12 toilet rolls in my bathroom.

I think he wins.