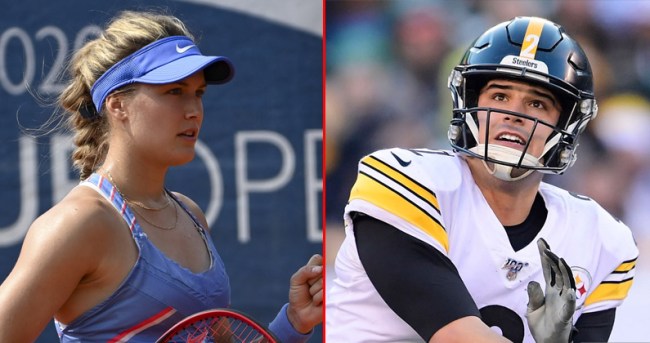 Looks like guys won’t be able to pay thousands of dollars for dates with tennis star Genie Bouchard anymore as her self-quarantine wish has apparently come true and she now has a boyfriend in Pittsburgh Steelers backup quarterback Mason Rudolph.

not complaining, but i feel like quarantine would be a lot more fun with a boyfriend

TMZ says a “source close to the couple” informed them “the two began a romantic fling recently … and have gotten pretty serious.”

Which explains why Bouchard, 26, recently posted a photo of herself sitting in a restaurant to Instagram with the caption, “pitt stop.”

And why the 25-year-old Rudolph dropped a “like” on said photo.

Looks like Rudolph is no longer with The Bachelor star Hannah Ann Sluss, huh?

This new relationsip must be doing wonders for Bouchard on a professional level as she reached her first WTA final in four years at the İstanbul Cup in September, upsetting top seed Svetlana Kuznetsova before eventually losing in the finals to Patricia Maria Țig.

I know what you’re thinking… you’re wondering if Bouchard’s twin sister Beatrice is still single and if maybe she’d be interested in a little bet on this year’s Super Bowl.

And if you’re not thinking that, you’re slipping.

spicy marg? who me??