Someone With A Lot Of Disposable Income Bid $85,000 To Go On A Dinner Date With Genie Bouchard 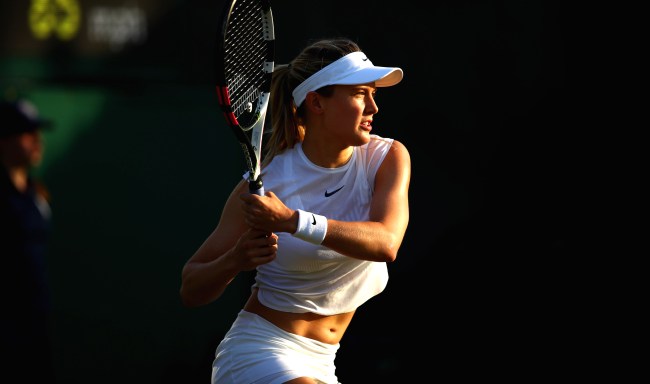 Tennis player Genie Bouchard appears to be starting her own cottage industry of going on dates with strangers if they are willing to pony up enough dough to help finance charities she supports.

It was just a little over a month ago, after complaining that she needed a “quarantine boyfriend,” a fan offered to pay $4,000 to a charity of Bouchard’s choice if she’d go on a date with him. She accepted, but we haven’t heard yet if they’ve gone out.

Of course, Bouchard going out on dates with strangers she’s met on social media is nothing new to her. Way back in 2018 she lost a Super Bowl bet to some guy on Twitter named John Goehrke and they ended up going out together more than once and their story was even being made into a movie.

This time the stakes were raised even higher as the 26-year-old Bouchard joined the All In Challenge so many celebrities have been participating in to raise money for charity.

It all started with a $2,500 bid, but started skyrocketing not too much later with a total of 37 bids being cast.

Get more than your 15 seconds of fame with Genie Bouchard. The lucky winner and a guest will go to any tennis tournament of their choice. That’s right, US Open, French Open, Wimbledon or the Australian Open – Genie has the airfare covered. Sit in the player’s box next to Genie’s team and coach while you cheer her on to victory. Enjoy a meal with the tennis star and even get a racket and sneakers signed by Genie herself. And if thats not enough, you and Genie will be the face of the 15SOF app for 2 weeks!

The winning bid ended up being $85,000, which all things considered, isn’t really that bad of a deal.

Dinner with Genie… signed racket and kicks… sit in the player’s box at a tennis major with airfare provided… you can also bring a guest (why would you do that?) with the hotel room comped.

“85K?!?!? you guys are AMAZING!!! i’m so grateful and proud of you all for joining me on this project. i can’t wait to meet the winner! this will help those in need so much,” Bouchard wrote on Instagram.

85K?!?!? you guys are AMAZING!!! i’m so grateful and proud of you all for joining me on this project. i can’t wait to meet the winner! 😏 this will help those in need so much. the proceeds go to @mealsonwheelsamerica, @nokidhungry, @americasfoodfund, @wckitchen & @feedingamerica. also —> i beat bob @allinchallenge @15sof

Now all the winner has to do is wait…… for tennis to actually start happening again as all professional tournaments have been cancelled until at least mid-July.