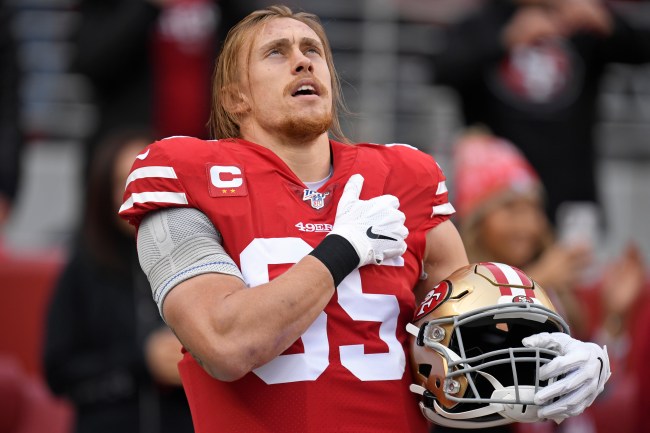 San Francisco 49ers’ star tight end George Kittle is playing in the Super Bowl next weekend but before the big game Kittle is taking some time to give back.

On Thursday, Kittle announced on Twitter that with the help of USAA and the Tragedy Assistance Program for Survivors (TAPS), he was going to award the family of a deceased military service member two tickets to the Super Bowl.

Josie and Nicolas Lamar, the wife and son of fallen military veteran Martin “Mick” LaMar will be attending the Super Bowl thanks to Kittle’s gift.

Excited to provide 2 tix to the #SuperBowl to the surviving family of @USArmy SGT Martin "Mick" LaMar of Sacramento (KIA 01/15/2011). Humbled to work with @USAA & @TAPSOrg to honor his legacy. We will never forget. #SaluteToService 🇺🇸 pic.twitter.com/OFeE4cQV2t

LaMar enlisted in the U.S. Marine Corps after graduating high school in 1986 and served in the first Gulf War.During his second tour, LaMar was shot and killed in Iraq on Jan. 15, 2011. He tragically died on the same day as his wedding anniversary and also the day he was supposed to return home.

“As I hit the field to play in the Super Bowl, I find comfort in the fact that 49ers fans Josie and Nicolas LaMar will be cheering our team on,” said George Kittle. “It’s a special privilege to be able to team up with USAA and TAPS to award a trip to the Super Bowl to Sergeant LaMar’s family in recognition of his military service and paying the ultimate sacrifice in service of our country.”

The LaMar’s will be joined by other military members and their families at USAA’s Salute to Service Lounge during Super Bowl weekend (Friday, January 31 and Saturday, February 1) in Miami. Open only to current military, veterans, and their families, the lounge will feature NFL, players, coaches, personalities, and legends.

The USAA is currently coordinating similar efforts with other NFL stars like Christian McCaffrey and Jarvis Landry.

Semper Fi SgtMaj Luis Leiva at Camp Lejeune! Thank you for nearly 30 years of service to our country and being part of the best defensive team I've ever seen. Proud to present 2 tix to #SBLIV on behalf of @USAA & @MCA_Marines. #SaluteToService pic.twitter.com/so8jqkAb0R

Honored and humbled to be able to provide a pair of tix to #SBLIV to Marine Corps vet George Reilly from @USAA & @TWSMilitary. Service runs deep in the Reilly family and I can’t say thank you enough. Enjoy the game! pic.twitter.com/hnxGNpz7ju