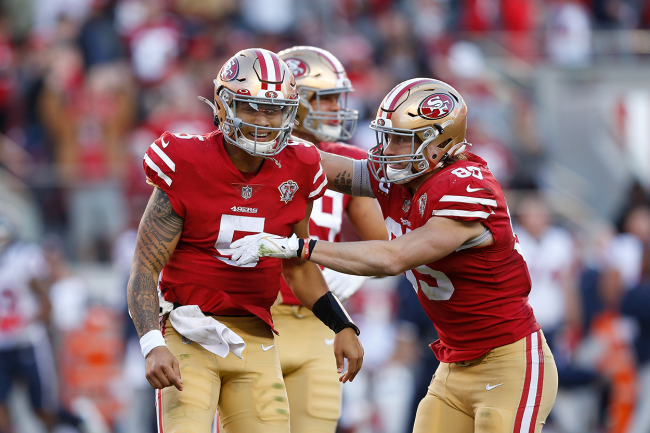 As the San Francisco 49ers look to improve on their NFC Championship appearance from 2021, the offense is going to look different. Not only did former run game coordinator and offensive coordinator Mike McDaniel leave for the head coaching job in Miami, but there will be a new quarterback under center.

After appearing in six games last season and starting two, Trey Lance will be QB1 in northern California this fall.

Lance, who was the No. 3 overall pick in 2021, comes to San Francisco by way of a very successful career at North Dakota State. He is young and there is a lot of rawness to his game, but he showed flashes of greatness with some insane throws last season and was remarkable both through the air and on the ground in college.

In addition, Lance has been a fantastic leader in his first year as the top guy and took his new role by the horns after the NFL Draft. As a result of the combination of factors, the second-year quarterback has received a lot of praise from players inside the locker room and from the greatest player in 49ers history.

Meanwhile, however, a subsection of the media has been critical of Lance and has been quick to pump the breaks on the hype.

George Kittle says that the Trey Lance slander is irrelevant because he knows how good he is and the media does not.

Earlier this offseason, Kittle told the I Am Athlete Podcast that Lance has ‘Josh Allen-like’ traits and spoke very highly of his signal-caller. He recently doubled down on those comments and called out the media in a conversation with USA TODAY’s Mackenzie Salmon.

“The people that are talking aren’t in the building every single day, so how much do they really know,” Kittle asked in response to some of the negative headlines.

The All-Pro tight end then proceeded to give some significant praise to Lance, but prefaced any doubt surrounding the former Bison with the fact that he is relatively inexperienced.

“With Trey … he’s got an insane ceiling. The plays I’ve seen him make in practice are incredible. All Trey Lance needs is reps and that’s all it is. He didn’t play a ton in college. He’s got the ability, he’s got the charisma, he’s got the character for it.”

Despite the fact that there has been no official decision made, the understanding is that Lance will be the starter over Jimmy Garoppolo. Kittle says that although he doesn’t know what the plan is, he expects that the 49ers can lift Lance up if he does experience some initial struggles.

“With Trey … he’s got an insane ceiling. The plays I’ve seen him make in practice are incredible. All Trey Lance needs is reps and that’s all it is. He didn’t play a ton in college. He’s got the ability, he’s got the charisma, he’s got the character for it.”