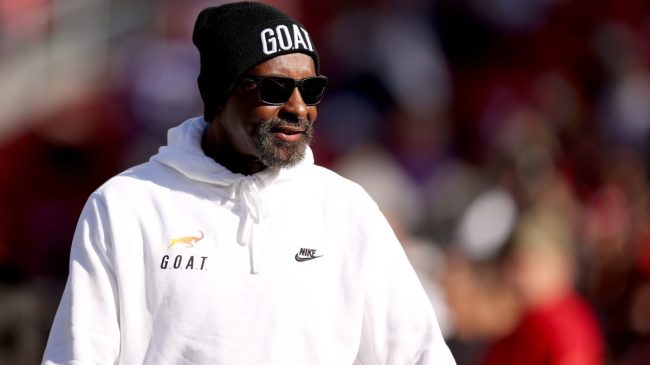 There’s going to be a big change in San Francisco next year.

Despite the 49ers’ appearance in the NFC Championship last season, the team is likely to move on from starting signal caller Jimmy Garoppolo. In fact, they’ve openly admitted their plans to trade the passer ahead of the 2022 campaign.

While head coach Kyle Shanahan has stated that it’s not a guarantee that the team is able to ship the quarterback (mostly due to an offseason shoulder surgery), the 49ers are doing what they can to move on from Garoppolo.

That would leave the starting role open for former first-round pick Trey Lance. Lance appeared in six games last season, including making a pair of starts where he posted a 1-1 record. In that time, the gunslinger completed 57% of his passes for 603 yards and five scores. A dynamic playmaker, he also rushed for 168 yards and a touchdown.

Now, the job looks to be his for the taking.

Lance came out of North Dakota State with a ton of potential. The 49ers took a chance on him with the third pick of the 2021 draft with plans for Lance to become the face of the franchise. He’ll get his first opportunity in 2022.

While some my doubt the youngster, he’s landed maybe the most important endorsement the franchise can offer.

Jerry Rice believes Trey Lance will be a special player

Jerry Rice, the greatest player in the history of San Francisco football, was asked about the team’s new quarterback in an interview with Boardroom.

His endorsement of the passer should tell 49er fans all they need to know.

“I knew Trey was going to be special from the first day I talked to him. I told him right before the draft, ‘You’re going to be a San Francisco 49er.'”

He went on to speak about Lance’s abilities on the field, and what fans can expect in the upcoming season.

“This guy, he has all the tools. He’s got that rocket arm. And the thing too that he’s going to bring to the table: mobility. Being able to get outside, extend plays, do all of those things and still have the vision downfield where he can use that arm to get the ball to his playmakers.”

Strong comments on the team’s new signal caller. If he plays to the potential that Rice envisions, the 49ers are in good hands.