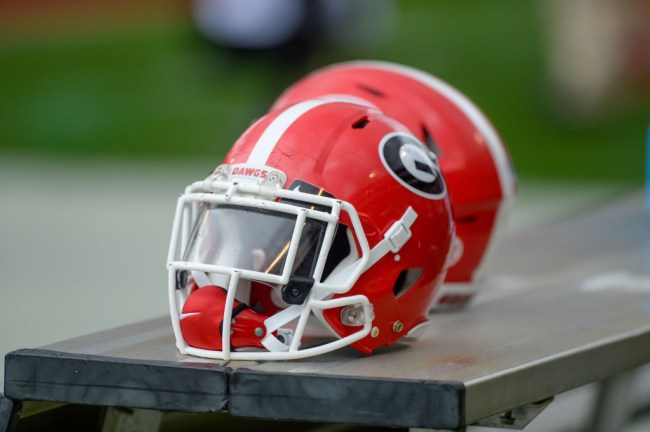 Georgia student photographer Chamberlain Smith was on the sideline of the Georgia – Auburn game in Alabama on Saturday and just before halftime, Georgia’s Brian Herrien was shoved out of bounds into Smith knocking her unconscious for quite some time.

It was a scary scene that ended with her being taken off the field on a stretcher and being taken to a nearby medical center, but she managed to actually get a shot of Herrien just milliseconds before she was knocked out.

For those of you asking if I got “the” shot, here it is!! The last thing my camera & I saw before being tackled. @brianherrienn, I hope you LOVE this photo!! ❤️🏈📷 #godawgs pic.twitter.com/mxWfyWhcUU

This is pretty remarkable. It’s literally the second before Smith was knocked out on the sideline by the Bulldogs running back. It’s the moment before what was probably the scariest moment of her life and she captured the still right before it happened.

I think it’s safe to say that’ll be a memorable photo of hers for the rest of her life.

Smith tweeted out an update following the incident informing everyone of great news that she was able to walk away from all of this with a concussion and a couple of bruises.

Photographers and sideline personnel get hit by players pretty much every game, but Saturday’s incident at Auburn was different as Smith laid there motionless for what felt like minutes on end. It’s fantastic news she walked away from all of this with a few bruises and a concussion because things seemed like the worst-case scenario as the accident occurred.