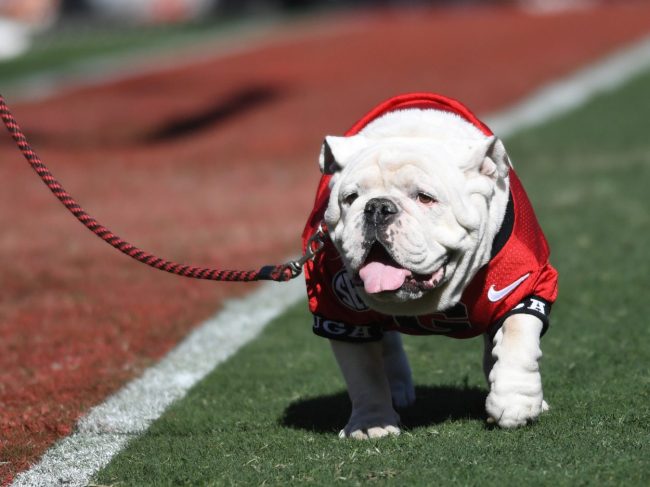 When it comes to mascots in college sports, very few are as cute or cuter than the Bulldogs. Butler, Georgia, Mississippi State and Yale all have the bulldog as their live, on-field mascot and each of them deserve all of the boops and pets.

However, Georgia’s ‘Uga’ and Butler’s ‘Blue’ are the most notable/famous amongst the four. And now they got to meet each other on Monday.

Georgia plays Alabama in the College Football Playoff National Championship in Indianapolis on Monday night. Butler University’s campus is located 15 minutes from Lucas Oil Stadium, where the game will be played, which made for an easy meet up between the two dogs.

Both dogs were sporting their own custom-made jerseys with the Georgia “G” and Butler “B” and seemed to get along quite well. It was adorable.

I AM NOT OKAY.
A meeting of the best bulldogs in the land.
UGA 🤝 Blue. #CFBPlayoff (video credit: Butler University) DGDs. #Dawgs pic.twitter.com/ERDHrK1fdm

His new friend, Uga IX, is also part of a long line of English bulldogs.

During the playdate, the two stopped to take a photo and it is the most wholesome thing that you will see today. Both of them were looking at each other and came as close to smiling as a bulldog can smile.

Win or lose on Monday night, Uga will have left Indianapolis with a new friend, and that should count for something. This is the type of content that we want to see!