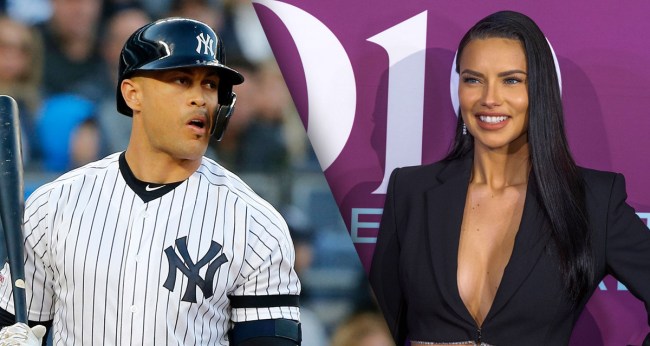 Pitchers and catchers begin reporting for Major League Baseball Spring Training in just a couple of weeks with the San Diego Padres, Pittsburgh Pirates, and New York Mets being the first to begin camp on February 10th, followed the next two days by the rest of the 30 baseball teams following suit.

Position players will start arriving anywhere from February 14th to the 17th, with the first official game taking place between the Rangers and Royals in the afternoon of February 21st.

Manager Aaron Boone will be glad to know that Stanton, 30, who only managed to play in 18 games during the 2019 season thanks to a litany of injuries, has been keeping himself in top condition… by bench-pressing supermodel Adriana Lima. Oh, and he also uses a sledgehammer to give a tire a beatdown.

Stanton, on the other hand, reportedly dated Sports Illustrated swimsuit model Chase Carter and has been linked in the past to UFC Octagon Girl Arianny Celeste.

Seems like the 2017 National League MVP and former Victoria’s Secret model could be a match made in heaven. Just imagine the kids they would produce.

After all of the Houston Astros negativity it’s kind of nice to be reminded that baseball is supposed to be fun – even it does take a guy benching supermodel to remind us.