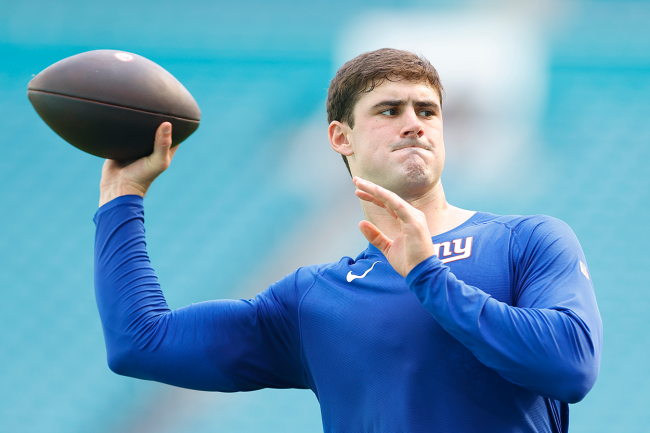 With the No. 20 overall pick in the 2021 NFL Draft, the New York Giants selected wide receiver Kadarius Toney out of the University of Florida. After entering the fall with high hopes, Toney played in only 10 games with four starts. He caught 39 passes for 420 yards and no touchdowns.

It was simply not the production that the Giants were looking for from their first round pass-catcher. Not a great rookie campaign, but he was dealing with injuries for most of the season.

As New York and Toney gear up for year two, the former Gator has been putting in as much work as possible during camp. He even went over individually for some pass-catching work on Tuesday while the rest of his team got warmed up.

While the idea was great in principle, the execution was incredibly embarrassing. Toney was working with the JUGS automatic pass-throwing machine, but it completely failed him.

The JUGS machine threw some incredibly weak passes that landed extremely short of the intended target.

Toney working on his hands pic.twitter.com/TQsaxtomEN

The failure made for a prime opportunity to get some jokes off.

First and foremost, of course it was the Giants whose JUGS machine wasn’t working. The franchise is such an easy target.

To make things even funnier, there were quite a few comparisons made to Daniel Jones, saying that Toney actually was preparing for the upcoming season by catching some weak, lame duck passes.

Who the hell is using the jugs machine. Guess there getting ready for these kind of passes. pic.twitter.com/JfSekuTzyi

Dang. Danny dimes must be worse than I thought if that’s the throws they are replicating.

Lmaoo. They got the machine on Dan Jones mode.

WOWWW They got Machines that mimic Daniel jones

not being funny or anything but why would you post this? he literally is just standing there and then the machine malfunctions twice

The giants are so awful even the jugs machine doesn’t work https://t.co/2xbirPajhF

They can’t even get the machine to work https://t.co/RO0SziMK04 pic.twitter.com/scQQLkC0qs

Bruh. How did the giants get a JUGS machine with the Daniel Jones setting on it? https://t.co/bUWMmf2yKo