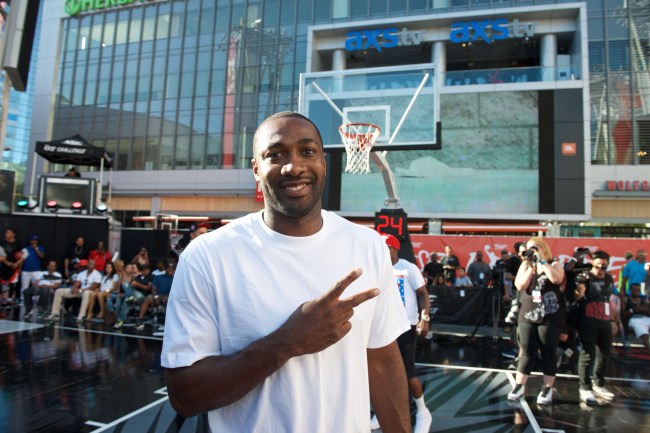 Gilbert Arenas was known for being absolutely lethal on the hardwood during his NBA days, but, since leaving the league in 2012, the former sharpshooter has been even more of an assassin off the floor, with the former All-Star never one to hold his opinions to himself. While Gil has chimed in on all sorts of things — and has sort of become the NBA’s version of Antonio Brown when it comes to popping off at the mouth about things — his latest take is actually pretty tame.

As most of us know, former OKC Thunder teammates Kevin Durant and Kendrick Perkins got into it on Twitter recently, with KD being his usual (sensitive) self and taking objection to Perkins calling out the former league MVP for leaving the Thunder to join the Golden State Warriors to chase titles. It’s pretty good theater, as NBA social media drama is always the best kind of sports drama.

Enter Gilbert Arenas, who gave his thoughts on the topic, offering up some cold hard facts to Perkins by defending Durant’s decision in 2016 to join the Warriors. Here’s the lengthy Instagram post from Arenas below.

Since Arenas’ post is pretty lengthy, here’s an embed of what he had to say — which is both pretty accurate and funny, as Gilbert sort of sticks it to Durant there at the end.

@therealkendrickperkins everyone has there opinion about @easymoneysniper GS move and as a hooper u should have put more thought into what u said so I’ll give u an history lesson..2012 a young and upcoming okc team went to the finals being (inexperience) they lost to the HEAT…2013 the team didn’t succeed like they would have wanted.that summer OKC ownership made the dumbest move by not securing (harden) if u can put harden back.(KD/Russ/harden) was more powerful then (curry/klay/green) which later became the team too beat (GS 1 ring ) could have been Easily been (OKC 3 peat if harden never left) but let’s keep moving..now 2016 okc takes. 3-1 to GS and loses.cavs won the championship that season.KD is a free agent….here’s where short minded thinkers fail to realize @easymoneysniper had no choice..OKC was moving backwards in progress..NOW here’s why KD had no choice..you guys sit on tv with pushing rings and legacy down fans throats so KD is a free agent at 27 years old with a sheet that looks like this👀7 time all star.7 time all Nba…4 time scoring champ..1 time mvp..2 time allstar mvp.2 time gold medalists💯 there’s not 5 NBA players in history that can say they were FIRST BALLET HALL OF FAMERS by 27…the only thing needed as an individual player was (ring and finals mvp) now let’s take a look at opinions..only two teams that can give him those two boxes were GS and cavs who were the champs..being the champs cavs wasn’t making a move..actually like me say this better..CAVS being cheap asses wasn’t gonna sign KD (Dan Gilbert bought that team in 2005) the biggest outside free agent they have signed was @thereallhughes in 2005…that was 15 years ago…contracts has double since then and that’s still the biggest outside free agent signings 🤔🤦🏾‍♂️ so the only team that’s left was GS….as someone checking boxes off his nba career that was the smartest move he could have made💯I’m sorry Kendrick but everyone is not lucky enough to be a sorry ass rebuilding Boston team and bam bam two ex Boston players (Danny A and mchale) does a deal that makes u a champ..now u think u light skinned with ya chest out 😂 PS I agree with 99% of the stuff u spit tho

Although Gilbert Arenas isn’t in the NBA anymore, he’s still very much part of the scene. And when he drops himself into debates like the Kendrick Perkins-Kevin Durant Twitter beef, it’s everything we need as sports fans.