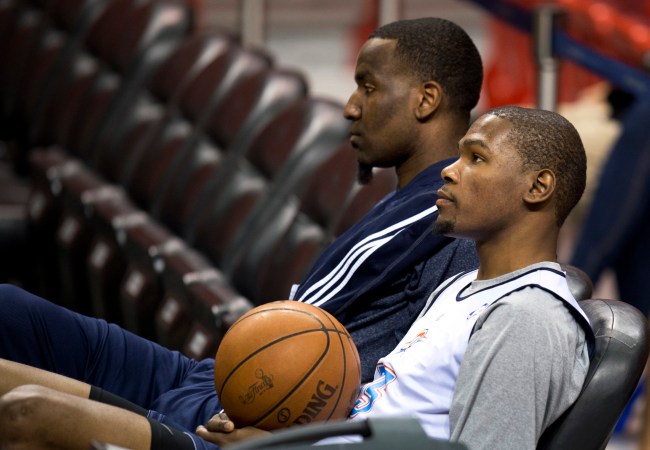 For those just waking up from a coma, former OKC Thunder teammates Kendrick Perkins and Kevin Durant engaged in a highly entertaining online squabble that left both with hurt feelings.

What began as Perk claiming Russell Westbrook is “the best player to ever put on an Oklahoma City Thunder uniform” ended with him picking at the scab of Durant’s deepest insecurity: ring chasing.

Perk even called Durant jumping ship to the team who just beat him in the conference finals the “weakest move in NBA History.”

After the online fist fighting ceased, Kendrick Perkins made an appearance on Brian Scalabrine’s “Scal and Pals” show Friday morning to vent more.

Perkins didn’t walk back his most hurtful claim that Durant walking out on OKC to join the Warriors the “weakest move in NBA history.”

“I don’t have a filter,” he said. “So what I do, is I strike back. Boy, stop playing with me. You did the weakest move in NBA history, up 3-1 in the Western Conference Finals and then you go join them the following season.”

Yeah, Perk, it was weak. But THE weakest?

As a Celtics fan, it pains me to do this but I have to enter into the conversation: “Paul Pierce Pretending To Resurrect From The Dead.”

Today is the 11th anniversary of Paul Pierce's "Wheelchair Game!"

What the fuck was that about?