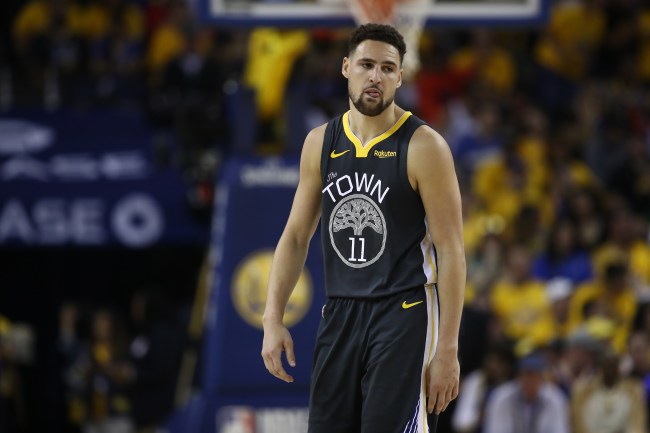 The Golden State Warriors might look different now that Kevin Durant left for the Brooklyn Nets and All-Star shooting guard Klay Thompson will be rehabbing a torn ACL he suffered in the NBA Finals, but they team’s still pretty star-studded. Sure, Thompson might not be on the floor when next season starts, but the Warriors just locked him up for the next five years by signing him to a five-year deal worth $190 million — which was the max deal most think he deserved.

But not everyone is convinced that Klay Thompson’s new deal with the Dubs is a good value, because a breakdown by the analytical website FiveThirtyEight shows that the Golden State Warriors may have overpaid for an “average” player. Yep, you read that correctly.

According to a newly-released NBA player projection system called CARMELO — which projects a player’s impact by estimating the number wins his team could expect with him playing instead of a low-level replacement player (like a G-League call-up) — Thompson is an “average starter” who has a value of about $64.7 million over five years, which is far from the $190 million he actually got recently in free agency. To put that in perspective, CARMELO claims that Ricky Rubio is $10 million more valuable than Klay Thompson is. WTF?!?

Here’s how FiveThirtyEight describes its CARMELO system, per SF Gate.

“CARMELO projections forecast a player’s future by looking to the past, finding the most similar historical comparables and using their careers as a template for how a current player might fare over the rest of his playing days. After running a player through the similarity algorithm, CARMELO spits out offensive and defensive ratings for his next handful of seasons, which represent his expected influence on team efficiency (per 100 possessions) while he’s on the court.”

Uh, OK, but I’ve got to question the legitimacy of this CARMELO projection when it comes to Klay Thompson. Still just 29 years old, the guy is one of the best shooters and two-way players in the league. He’s known his role on the Golden State Warriors since joining the team, and he plays the perfect complement to Stephen Curry in the backcourt, so it’s suprising that an analytics site projected him so low.

For those wondering some other players that the CARMELO system ranked as an “average starter” like Klay Thompson was, names like Evan Fournier, Thaddeus Young and Joe Ingles were comparable, which seems insane. On the flip side, other Golden State Warriors players like Kevon Looney and D’Angelo Russell were both rated as a “future All-Star” player, so, yeah, not sure how much these projections can be taken seriously; because Thompson’s better than all those guys.