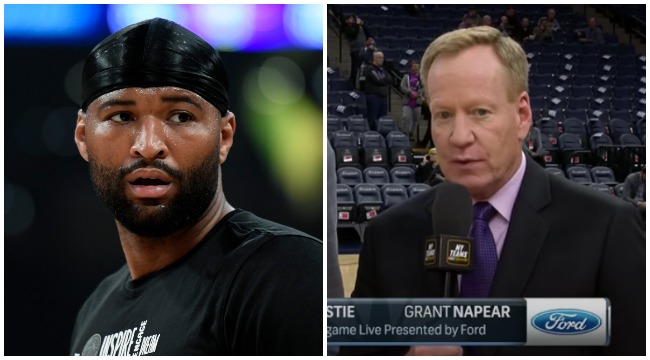 Sacramento Kings TV play-by-play announcer Grant Napear has been the voice of the Kings for three decades.

The 60-year-old is on the board of the FUTURE Foundation of Sacramento, which provides college scholarships for those in need of financial aid. For 25 years, he’s hosted a golf tournament raising funds for underprivileged. His late father, Bert, fought for civil rights on Long Island.

I understand your point completely. Please respect how I was raised. My father taught us at an early age that racism would not be tolerated in our family. I've lived by that ideal every day of my life! So do black lives matter? Hell yes!!! https://t.co/UkDpNrA00Z

Still, in the witch hunt world of social media, flippancy is valued more than legacy.

With just three words, after being baited by former King DeMarcus Cousins, Napear was not only forced to resign from the Kings, but he was also fired from his own radio show, The Greg Napear Show.

Hey!!!! How are you? Thought you forgot about me. Haven't heard from you in years. ALL LIVES MATTER…EVERY SINGLE ONE!!! https://t.co/DfzKl3w0jm

If it came across as dumb I apologize. That was not my intent. That's how I was raised. It has been engrained in me since I can remember. I've been doing more listening than talking the past few days. I believe the past few days will change this country for the better! https://t.co/Gsh84BPBEk

Former Kings players Chris Webber and Matt Barnes piled on, with Webber calling Napear a “clown” and Barnes flat-out saying he’s a “closet racist.” The allegations may stem from a tweet in 2018 in which Napear agreed with a Twitter user who said they didn’t want to see protests at football games.

100%…trust me I have more black friends than white. I grieve with them and pray that before I leave this earth we can finally truly walk hand in hand https://t.co/TSy62taHq7

Sports radio personality Chris “Mad Dog” Russo, who’s known Napear since he was a kid in Long Island, put his reputation on the line to vouch for Napear:

“To say that Grant Napear is a racist is absurd. In my knowledge of him … Grant Napear, trust me when I say this, this is me, is anything but a racist.”

Napear, fighting back tears multiple times, spoke to the New York Post about the tweet that lead to his demise.

“I don’t want to call it a mistake. I don’t even know what adjective to describe it.”

Napear passionately defended himself against the claim that he was trying to belittle the Black Lives Matter movement.

“It makes me feel sick to my stomach because it is absolutely the opposite of who I am,” he said. “I am 60 years old. I will let the track record of my life and what I’ve done for my community and what I’ve done. … People who know me, of all races, I’ll let them tell the story.”

The now unemployed announcer claims that Cousins’ disdain for him is the product of the criticism Napear assigned Cousins during his time in Sacramento.

“He was constantly in trouble, getting into suspensions. He was a very volatile personality. And I had a talk show and so there were times I had to be critical of him. I’m sure he did not appreciate my criticism.”

In 2019, Napear called Cousins “the rudest, crudest, most vile player that I have ever been around in my 31 years in the NBA,” after Cousins cursed out Raptors fans who cheered the injury of Kevin Durant during the Finals.

Napear said he also has criticized Webber on and off the court, and claimed Webber and Cousins were “two of the most sensitive athletes” he’s ever been around.

As far as what’s next for the disgraced announcer, he doesn’t know, “just trying to get through today.”