Love Him Or Hate Him, Grayson Allen’s NBA Combine Stats Are Jaw-Dropping 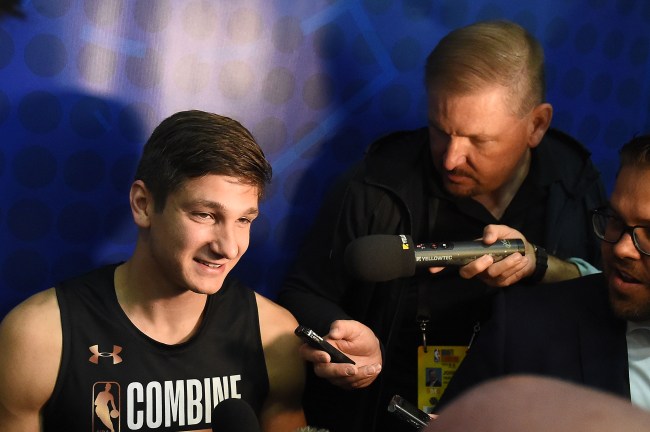 If you’re a college basketball fan, you probably have a strong opinion on Grayson Allen, Duke’s supremely equally talented guard and irritator. The 22-year-old Jacksonville native has declared for the NBA Draft after his Blue Devils were bounced by Kansas in the Elite Eight.

Day one of the NBA combine kicked off Thursday in Chicago with Allen looking to inflate his draft stock by performing well in various athletic measurements.

Allen posted a lane agility time of 10.31 seconds. According to ESPN draft analyst Jonathon Givony, that’s the fifth-best mark in NBA Combine database history, dating back to 2000. He also had the second-best shuttle run time (3.4 seconds) in the combine and tied for the fourth-highest in both max vertical leap (40.5”) and standing vertical (32.5”) among those who worked out this year.

Grayson Allen's 10.31 lane agility speed is one of the five best marks in our NBA Combine database's history. Seems like he's going to end up testing off the charts here athletically.

Allen completed his 40-inch vertical off one foot, making his feat more impressive.

Scouts are still trying to put Grayson in a comparative box–looking for the most correlative NBA comparison. When reporters asked the 6’5” guard if he’s most like J.J. Redick, Duke’s legendary guard who has had a successful and ongoing NBA career, he said, smiling:

When asked if he was like Jimmer Fredette, the relentless BYU scorer who is now a living legend in China, an NBA executive said:

“Night and day. Jimmer was a great scorer, but he wasn’t a playmaker, he wasn’t athletic and he couldn’t defend. Grayson is a superior athlete — and there are more dimensions to his game.”

As it stands now, NBA executives are split on where they see the former McDonald’s All-America landing in the draft. One exec told Yahoo Sports that he saw Allen as a “second-round pick. Another saw him in the 25-to-35 range. A third said if he had a chance to draft Allen in the late teens, he would take him.”

The question remains if Grayson’s proclivity to use his feet as weapons will hurt his draft stock. Who am I kidding, he’ll fit right in.