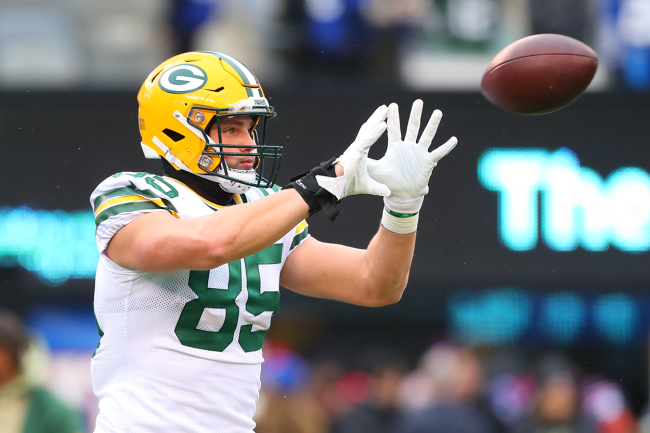 The Green Bay Packers traded away their best offensive weapon during the offseason. Davante Adams is now on the Raiders and the team will need to find ways to replace his production in the passing game.

To address their needs at receiver, the Packers drafted Christian Watson out of North Dakota State and added Sammy Watkins through free agency. In addition, a new workout video provides some encouragement that the team may have one of its top targets return in time for the start of the season.

Tight end Robert Tonyan missed the second half of the 2021 season with a torn ACL. Reports during the offseason suggested that he might not be ready for Week 1, which would likely require Green Bay to put him on the P.U.P. list and play without him for the first four weeks of the year.

While that could still very well be the case, Tonyan appears to be well on his way to getting back to full strength. The 28-year-old out of Indiana State, who has carved out quite the career for himself after going undrafted, was recently in Nashville for Tight End U and then to workout with George Kittle and a few other NFLers.

In a video that shows Robert Tonyan putting in the work, he appears to have a full range of mobility and is seemingly able to cut normally off of both legs.

His twitch may not be that of Kittle, but he looks explosive and healthy, which is an extremely encouraging sign for the Packers.

Prior to his injury last season, Tonyan was the fourth-most targeted player on the Packers in 2021. He caught 52 of 59 passes thrown his way by Aaron Rodgers, which was four less than both Aaron Jones and Marquez Valdes-Scantling and 90 less than Adams, and was the team’s third-highest pass-catcher in terms of total yardage.

The Packers open 2022 against the Vikings, Bears, Buccaneers and Patriots. There are a lot of kinks to be worked out in the passing game and if Tonyan — a player for which Rodgers is familiar — can be on the field, it would be a big boost to the offense.