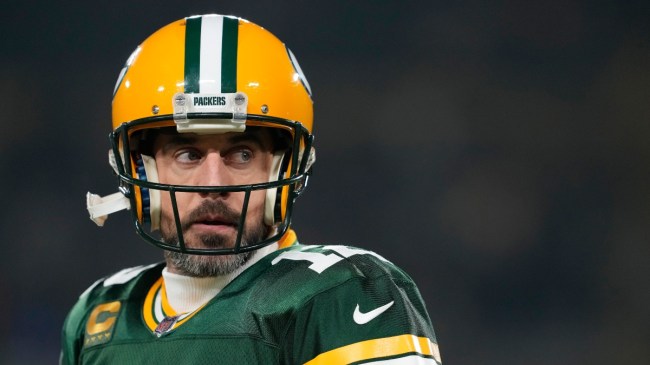 If the Green Bay Packers do decide to trade quarterback Aaron Rodgers, they won’t be doing so within their own conference, per reports.

According to a report from ESPN’s Adam Schefter, the Packers — who would reportedly seek “at least two first-round picks” in exchange for the 39-year-old four-time MVP — will not trade Rodgers within the NFC and will “explore” the idea of trading him to the AFC.

Earlier this morning, we brought you the report that the New England Patriots, New York Jets, and Las Vegas Raiders could be interested in Rodgers. While the Seattle Seahawks were also mentioned in Peter King’s blog, their being in the NFC likely rules them out.

Despite signing a three-year, $150 million extension with the Packers last offseason, his future with the franchise remains as murky as ever. In fact, the Packers might find themselves enticed to cash in on Rodgers given that he’s coming off one of his worst seasons in recent memory.

Of the 16 teams in the AFC, there are eight teams that are without a franchise quarterback that could make a play for Rodgers: the New England Patriots, New York Jets, Pittsburgh Steelers, Houston Texans, Indianapolis Colts, Tennessee Titans, Denver Broncos, and Las Vegas Raiders. The Baltimore Ravens could also become one of those teams if they failed to come to a contract extension with Lamar Jackson.

Then, of the aforementioned AFC teams, the Broncos are likely out due to their ties to Russell Wilson, while the Texans are also doubtful given the current state of their franchise, which leaves the Pats, Jets, Steelers, Colts, Titans, and Raiders as the six teams that could theoretically trade for Rodgers.