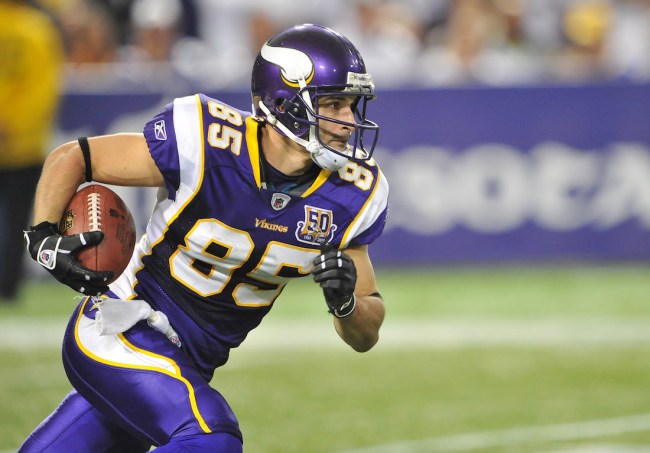 Not many people out there probably remember the name Greg Camarillo, who played in the NFL for seven seasons, hauling in 146 catches for 1,730 yards and five touchdowns over the course of his career. So, while not memorable on the gridiron, the dude was a solid secondary option for the teams he played for.

Although Camarillo wasn’t a star, he can relate to some of the gruesome stories we’ve heard about NFL players following their playing careers. Guys like Jim McMahon, Aaron Hernandez and Junior Seau come to mind, who have either talked about the physical and/or mental pains that come from playing such a violent sport professionally.

We’ve also heard about former NFL players who struggled with their identity following retirement from the league, finding out that, at around 30 years old, a life they’ve known — focusing on football pretty much 24/7 — has ended, and it’s time to redefine themselves. That can be difficult, and it’s something that Greg Camarillo tweeted about recently.

Football players struggle when our careers are over. It's hard. We have been football players for years. It's what we do, what we know, and a big part of who we are. And then it's gone. A big part of our identity lost. (thread 1/6)

Football is the ultimate team sport. We are taught to bury our problems and pains for the benefit of the team. In a game, that works. In life, that's dangerous. The mentality of 'suck it up' or 'fight through it' doesn’t work in real life. (2/6)

We often reach a pinnacle at a young age. Our childhood dreams have come to fruition. Then at around 30, we start over. How will we ever achieve something this great again? Will I ever feel this same excitement or pride again? That's hard to deal with. (3/6)

Our conversations with friends and family are always about football. People love talking about the game. So do we. And then suddenly, it's 'what are you doing now?' 'What's next?' A strictly regimented life is now wide open. The adjustment is hard. (4/6)

Physical pain can take a toll. Memory problems. Aching knees. Restless nights. It all adds up

You never know what someone is dealing with.The battles they are fighting. We all go through it. Its okay to need help. We all need help at some point. (5/6)

Call your friends. Call your family. Check in. Send Love. Show Support. Life is short. Take advantage of every moment you have. (6/6)

Now, I’m not psychiatrist, but this does sound like a guy who’s pleading with other former NFL players to take action and feel like it’s OK to speak up about lingering issues relating to their playing days. It’s a sentiment we’ve heard from other former athletes as well, with Ryan Leaf recently echoing something similar about how the league recycles players and forgets about them once they’re out of the league. It’s scary AF.

For every Tom Brady and Drew Brees — who have defied the odds by playing at a high level into their 40s — there’s a guy like Greg Camarillo, who retired from the NFL at age 30 and was forced to leave the only life he knew behind him. Add in the physical and mental issues that came along with his day to day, and, well, one can understand how difficult the struggle really is for former NFL players.

With the devastating news of former wide receiver Vincent Jackson’s death earlier this week, here’s to hoping more former and current NFL players follow Camarillo’s lead, speak up and encourage others to seek some help.