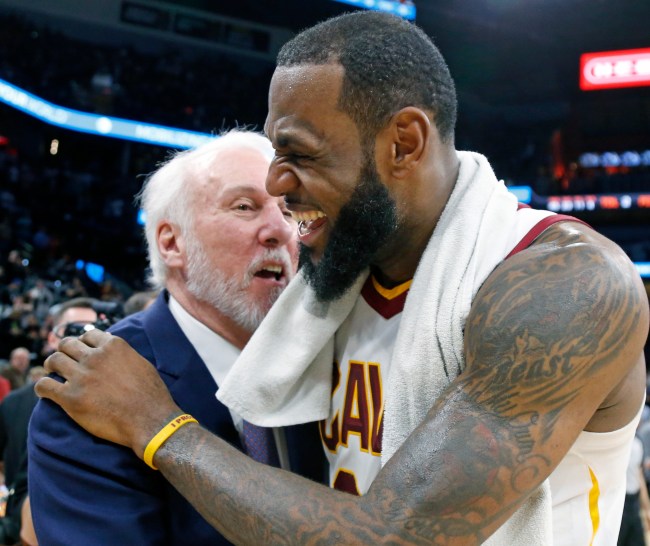 Last week, comments by Fox News host Laura Ingraham went viral after she told LeBron James to “shut up and dribble” following his disparaging comments about President Trump. Ingraham dedicated an entire segment to ripping into LeBron and calling into question his intelligence and credentials to talk about politics. Mind you, Fox is the same publication that has brought on Broadway Joe to talk about the border and Kid Rock to chat about Obama.

Among the public figures to weigh in on Ingraham’s comments was Spurs coach Gregg Popovich. I think it’s safe to say he’s very much in LeBron’s corner.

Via For The Win:

“But to not have a feel for who this guy is…think about when he came into the public view. How young was he? And to this day he hasn’t missed a step. He hasn’t fallen off the ledge. He’s been a brilliant example for millions of kids, especially of kids of lesser opportunity who haven’t had the same advantages of others. And they see in this guy somebody who’s consistently exhibited excellence in the workplace. It gives them a voice, let’s them know that you can speak about anything.

“There really is a first amendment, and I can have opinions as a coach, as a plumber, as an astrophysicist, as a lowly reporter. I can have whatever opinions I want. And that’s what’s amazing about this. When you look at this guy, how many tens of millions of dollars he’s given? Tens of millions of kids that see him, that are inspired by him.

“It’s kind of like the Black Panther movie. How cool is that for kids to see that and have that superhero? Well, now, LeBron has been that for a long time. And for somebody to be totally numb to that and attack him in such a childish way, really speaks more volumes about that individual than it does Lebron.

“He’s very, very special. We should all be very proud that we have somebody like that who’s willing to speak about a variety of topics, and you’ve listened to them all.”

LeBron’s responsed to Pop’s praise after his Cavs lost to the Spurs last night:

“I’m going to continue to lend my voice and lend my spirit and lend my inspiration to these kids because I know exactly what they’re going through. Because I was one of them at one point in time, not too long ago.

“Pop is definitely one of my all-time favorite people that I’ve ever crossed paths with in my life.”

Cue the rumors about Pop’s praise doubling as a recruiting tool to bring LeBron to San Antonio next year. And for the time being, it seems to be working.